Venezuela′s love-hate relationship with the US dollar | Business| Economy and finance news from a German perspective | DW | 20.11.2019

Venezuela's leader Nicolas Maduro loves to speak of his hatred for the US. It makes his warm words for the enemy's currency a little puzzling. Dollarization is a reality in Venezuela but the benefits are dubious. 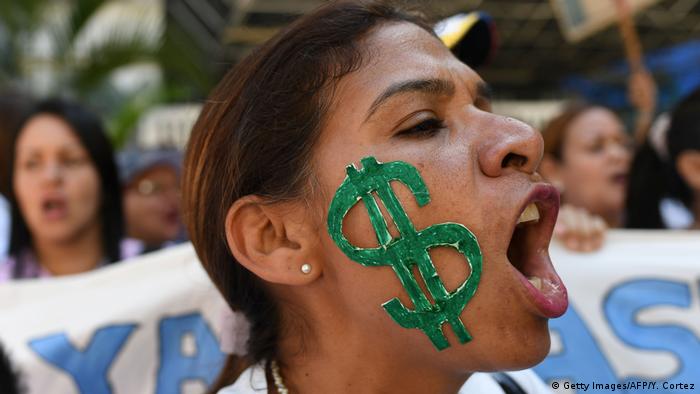 Venezuelan President Nicolas Maduro is surprisingly positive when it comes to discussing the widespread use of the US dollar in his country.

"I don't see it as a bad thing, this process that they call 'dollarization," he said in an interview broadcast on the television channel Televen last weekend. "It can help the recovery of the country, the spread of productive forces in the country, and the economy. Thank God it exists," he said.

Allowing the process of 'dollarization' to flourish means that Venezuela is ceding a portion of sovereignty in that it is subordinating itself to the monetary policy decisions of the US government and US Federal Reserve.

"Latin Americans still regard the national currency as a badge of sovereignty and independence. Giving up one's coin is seen as bending the knee to a foreign power. So much the worse if that overlord is the United States," writes Bloomberg South America expert Mac Margolis.

Every dollar has its day

Dollarization is the "monetary nuclear option" according to Margolis, a last resort when all other options have been tried. The dollar is used officially by just three countries in Latin America; namely Ecuador, El Salvador and Panama, which have adopted it in favor of their own currencies.

As far as things have gone in Venezuela, it hasn't reached the status of those countries according to economist Luis Vicente León, director of the market research firm Datanalysis in Caracas.

Although the Venezuelan Bolivar is zombie-like due to hyperinflation, he told DW that in October 2019 "only" about 54% of all transactions in goods and services in Venezuela were settled in foreign currencies. Nonetheless, that's a tenfold increase compared with the pre-crisis period before 2012.

The situation in Venezuela is not unique. In many other Latin American countries, the US dollar is often trusted more by those who can afford to do so. In Argentina, in the midst of its latest economic crisis, citizens pay as much attention to daily dollar rates as any other.

Maduro's claim that the US dollar will alleviate economic suffering in Venezuela is questionable. After all, the country's economic data is so grim as to possibly be beyond salvation.

Alejandro Werner, head of the IMF's Latin America department, believes things are only getting worse. "Real gross domestic product (GDP) is expected to fall by 35% in 2019, with the estimated cumulative decline since 2013 rising to over 60%," he said recently.

The collapse of the Bolivar, which has already lost 90% of its value this year, is expected to plunge further. Hyperinflation will rise from 200,000% this year to 500,000% next year, the IMF says. 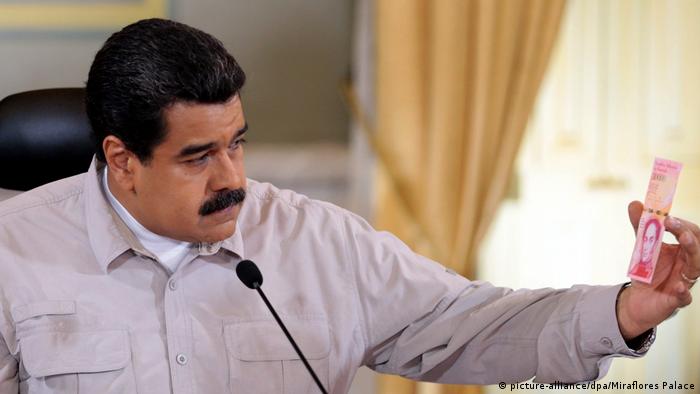 Nicolas Maduro has praised the use of US dollars, but he is still loyal to the worthless Bolivar

For months, Caracas' leaders have been trying to raise foreign funds to stave off further problems. Gold stocks have been sold to Turkey and others, undermining the US sanctions. Recently, a large shipment of Venezuelan scrap metal made the long vovage to Istanbul.

That all said, Maduro affirmed recently that the Bolivar would remain the official currency. He declined to say what could still actually be bought with the practically worthless banknotes, adorned by the face of its revolutionary namesake Simon Bolivar. Maduro also launched a cryptocurrency called the Petro as part of the firefighting attempts last year. It hasn't proven successful.

A car with no fuel

Venezuelan economist Ricardo Hausmann, who teaches at Harvard University and advises the Western-backed opposition leader Juan Guaido, compares his country's situation to that of a taxi driver who has a car but no fuel.

To stimulate the economy, he believes an opening of the oil sector for foreign investors is key to getting back foreign currency. However, he is skeptical about a process of dollarization.

In early 2019, he predicted that Venezuela would need an IMF rescue package of at least $60 billion to get the country's economy back on track.

It remains to be seen today whether such a sum would even be enough.