Venezuela has suffered from a severe political and economic crisis since a collapse in oil prices several years ago. It has sought to bolster its ties with Turkey as it faces down a range of US sanctions. 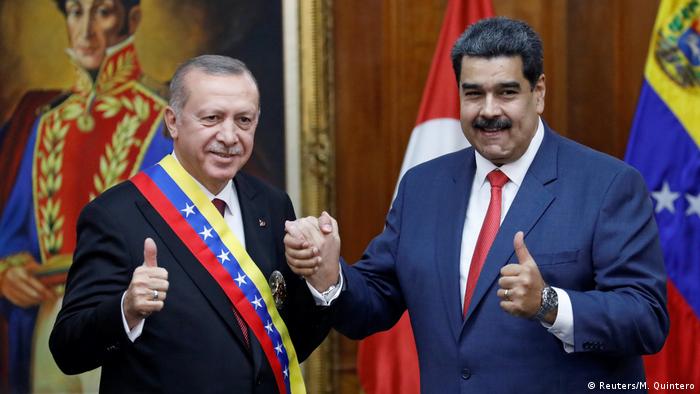 Turkish President Recep Tayyip Erdogan denounced US sanctions against Venezuela at a joint press conference with his Venezuelan counterpart Nicolas Maduro in Caracas on Monday.

Ties between the two countries have grown closer in recent months as Venezuela struggles to overcome a severe economic and political crisis.

The Turkish president said Venezuela had been unfairly targeted with economic sanctions, adding that he "did not approve of these measures that ignore the rules of global trade."

He said his "friend" Maduro was facing "manipulative attacks from certain countries and acts of sabotage from economic assassins." He vowed to strengthen trade ties with Venezuela to help alleviate the economic crisis.

He also praised Maduro, saying the Venezuelan leader's "exemplary attitude is very valuable at a time when enmity toward Islam has risen and Western countries are stoking hostility toward foreigners."

Maduro lashed out against US sanctions on Venezuelan gold, much of which has been bought by Turkey in recent months. "It is very petty to try to use an illegal sanction to prevent Venezuela from selling its gold to the world," he said.

The Venezuelan leader also vowed to strengthen ties with Turkey. Erdogan and Maduro signed multiple commercial and diplomatic agreements, including one that intensifies cooperation between their state-owned oil companies, during the Turkish president's stay.

US sanctions: Washington and several European countries accuse Maduro and his predecessor, Hugo Chavez, of causing Venezuela's economic crisis and violating human rights. In response, the US has passed sanctions on prominent Venezuelan officials and banned anyone in the US from buying Venezuelan gold.

Golden relationship: Turkey bought $900 million (€790 million) in gold from Venezuela in the first nine months of 2018, according to the Turkish Statistical Institute, making it the biggest importer of gold from the South American country this year. The gold trade has increased dramatically since 2016, when Turkey bought $84 million in Venezuelan gold.

Venezuela's plight: Venezuela's oil-dependent economy collapsed after a sharp fall in oil prices in 2014. Hyperinflation has blocked many people's access to food and medicine. The economic chaos also sparked a political crisis and mass emigration into neighboring countries.