Thousands of people are fleeing Venezuela amid food, power and medicine shortages. President Nicolas Maduro's government now wants to strengthen border controls and has raised the price for passports. 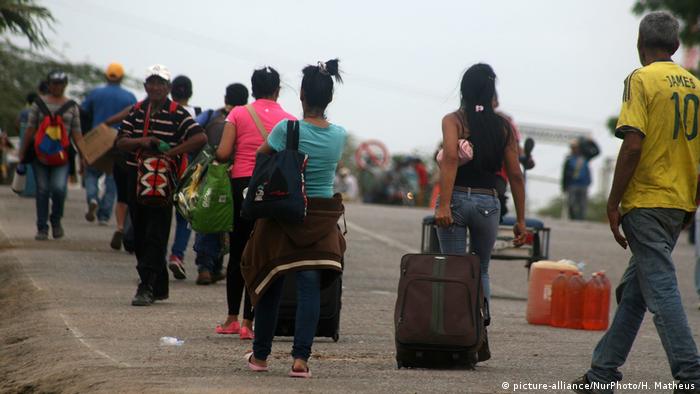 Venezuela's government created a new migration police force on Friday to increase controls at the country's borders amid a mass exodus sparked by an ongoing political and economic crisis.

She said that the police force will reinforce "the existing controls" that are currently being carried out by National Guard soldiers who oversee border security.

The vice president said that the police force was created to monitor migration "so that the truth will come out and not the imperial lies that from Washington want to be sold to the world."

Hundreds of thousands of people fled Venezuela after the country's oil-based economy collapsed in a crisis that has worsened under President Nicolas Maduro.

The crisis has led to shortages of food, medicine, running water and power across the country. Many have left the country by crossing across Venezuela's border with neighboring Colombia.

Around 1.9 million Venezuelans have fled the country since 2015, according to United Nations figures.

Maduro says that the figures of people leaving Venezuela are exaggerated in order to make him look bad. He claims that 600,000 Venezuelans have left the country in the past two years and that 90 percent of those who leave regret doing so.

As of next week, the issuance fee for passports will rise to 7,200 bolivars (around $62 or €54 on the black market), she said. The fees currently cost the equivalent of a few US cents.

The new amount is around four times the amount of the monthly minimum wage in Venezuela.

"The price of a new passport will be 2 petros and (the price) of an extension will be 1 petro," Rodriguez said.

Venezuelans often struggle to get a passport under the current system, with people lining up outside government buildings to submit documents. According to Reuters news agency, many Venezuelans have had to wait months for a new passport, if they receive one at all.