The human cost of the US sanctions on Venezuela | Business | Economy and finance news from a German perspective | DW | 01.10.2019 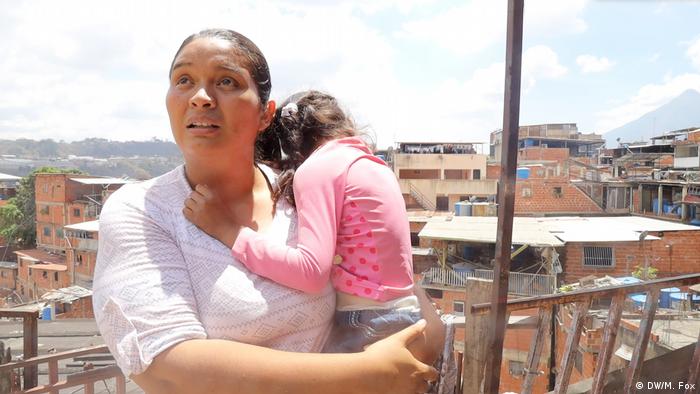 Carolina Subero lives with her mother, sister and three children, in a tiny two-bedroom cinderblock home in the poor barrio of Caucaguita in eastern Caracas.

Subero sits on her couch, with her youngest daughter Jenjerlys. She's 5 years old, with long dark hair and big brown eyes. But she's also autistic and epileptic, which means she needs medicine regularly — medicine she can't get.

"She has seizures every day," says Subero. "The medicine helps to make them not as bad. When we can't get her medicine, they send her to the hospital."

She says that Jenjerlys used to take four different medicines for her seizures. But now Carolina can only get one of the drugs, and that only some of the time, because it's too expensive.

A box of pills that will last 10 days, costs around $8 (€7.3). That doesn't sound like a lot, but it's a fortune in a country rattled by hyperinflation and a devalued Bolivar.

"I've had to trade food for the medicine," says Subero.

Jenjerlys is just one of more than 300,000 people who are estimated to be at risk because of lack of access to medicines or treatment because of sanctions on the country. That includes 16,000 people who need dialysis, 16,000 cancer patients and roughly 80,000 people with HIV, according to a report published in April by the Washington-based Center for Economic and Policy Research.

The situation is poised to get worse, with the total US embargo of the country, announced in August, and new EU sanctions levied last week.

"We understand that the Pan American Health Organization has had to change the accounts [used to purchase the medicine] four times, because they keep getting blocked," says Marcel Quintana, the person in charge of the distribution of antiviral meds to the country's HIV patients, something Venezuela has provided free of charge for decades. 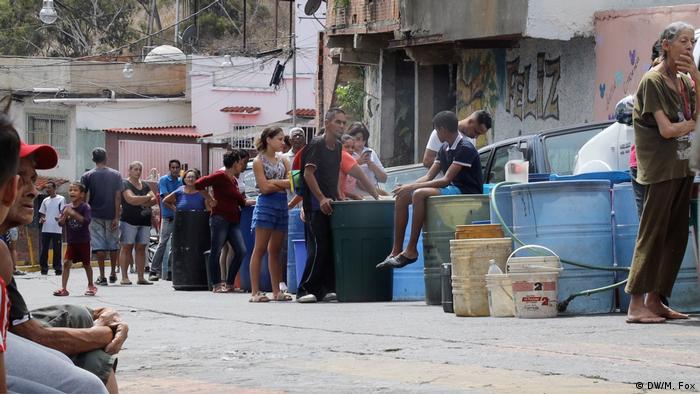 Venezuelans lining up for drinking water in Caracas (2019)

The United States has been clear about its goal of imposing the sanctions to push for the ouster of Venezuela president Nicolas Maduro. The Trump administration has openly supported Venezuelan opposition leader and National Assembly President Juan Guaido. In January, he proclaimed himself president, which the United States and many EU countries quickly recognized.

Since then, Guaido has tried to overthrow Maduro with street protests, a showdown at the border with truckloads of humanitarian aid, and an attempted military uprising on April 30.

Those in the opposition blame Maduro for corruption, shortages, a failing economy and hyperinflation. Government supporters say the United States and an economic war are behind the growing crisis in the country.

U.S. sanctions have become increasingly aggressive since they were first announced by former US President Barack Obama in 2015. Under pressure from the United States, foreign companies stopped doing business with the country. Citibank closed Venezuela's foreign accounts.

President Donald Trump intensified sanctions in 2017 and this year imposed an oil embargo that blocked the purchase of petroleum from Venezuela's state oil company, PDVSA. It also confiscated Venezuela's US subsidiary CITGO, worth $8 billion. It was a huge blow for Venezuela, which received 90% of government revenue from the oil industry.

The U.S. government has also frozen $5.5 billion of Venezuelan funds in international accounts in at least 50 banks and financial institutions. Even if Venezuela could get money abroad, the United States has long blocked international trade by threatening sanctions on foreign companies for doing business with the country. 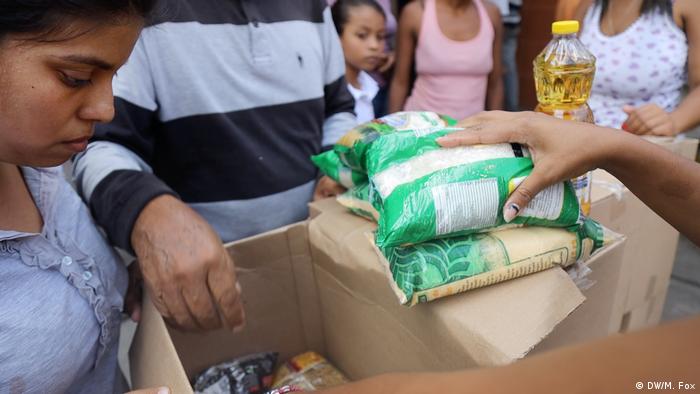 Food items being handed out to Venezuelans

According to representatives from Hidrocapital, the state water agency for the capital, Caracas, roughly 15%-20% of Venezuelans don't have access to potable water in their homes, because the government cannot acquire new foreign-built parts to fix broken pumps and pipes.

"With the blockade, we've had situations, where we have the pumps and the motors and they are about to ship and then comes the all-powerful hand of the United States and they block the money in the bank or sanction the company that is working with us, just for selling us this equipment and without seeing that they are affecting people's lives," says Maria Flores, vice president of operations at Hidrocapital.

In response, Hidrocapital ships truckloads of water each week to needy communities. But the blockade, and the lack of parts for vehicles, is also impacting the number of water trucks Hidrocapital can keep on the road. Maria Flores says their fleet has been reduced by 75% over the last three years, to now only a handful of trucks.

Those with access to dollars, in the wealthier neighborhoods of Caracas, are weathering the storm.

Shoppers pour in and out of the upscale Sambil mall on the eastern end of the city. On the top floor, a sushi restaurant is packed. A two-person meal there can cost several times more than the monthly minimum wage.

But in the poor barrios, many try to hold down multiple jobs. Jobs with access to dollars, if possible. Millions have left the country in search of opportunities abroad.

Carolina Subero's husband is one of them. He sends money home each month. But it's still not enough to pay for their little girl's medicine or to make ends meet.

Subero is not a huge fan of President Maduro. But she also doesn't blame the government. The problem, she says, are the US sanctions.

"They don't care. They think they are hurting President Maduro, and they're really hurting the people," says Subero. "If they really wanted something good for Venezuela, they would not be doing what they are doing right now."

The US president's move is his latest gambit to oust counterpart Nicolas Maduro from power. Meanwhile, Colombia says it will grant citizenship to babies born there to Venezuelan parents and thus at risk of statelessness. (06.08.2019)