Billy Six has walked out of a Venezuelan prison, where he spent the past four months following accusations of spying. However, the German journalist must continue to report to authorities. 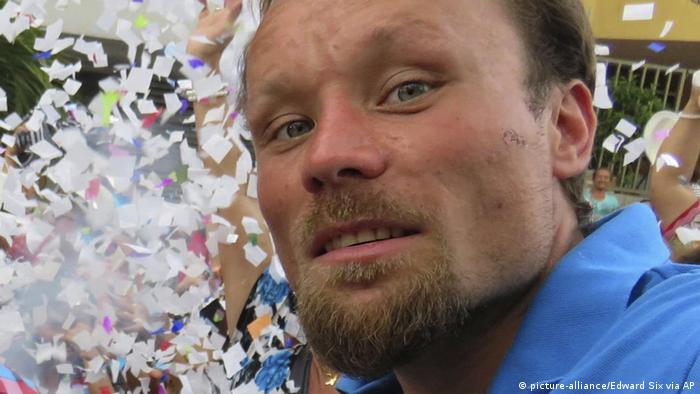 German journalist Billy Six has been freed from detention in Venezuela, an organization devoted to press freedom has said.

Six was jailed by Venezuelan intelligence authorities in November after being accused of espionage, rebellion and security violations.

The organization Public Space (Espacio Publico) tweeted that Six had been released after four months of unjust detention.

He will have to present himself every 15 days to authorities and has been prohibited from speaking out about his case, the organization added.

Upon leaving prison, Six got into a car alongside representatives from the German Embassy in Caracas, Spanish news agency EFE reported.

Six's parents celebrated their son's freedom, posting on Facebook," We are overjoyed!" while also criticizing German authorities for not doing more to help secure his release from prison.

Six is a freelance reporter for right-wing conservative publications and has reported from numerous conflict areas including Libya, Ukraine and Syria.

He was arrested while allegedly crossing into Venezuela from Colombia and then transferred to a military detention center.

Emmanuel Colombie, director of the Latin America branch of Reporters Without Borders (RSF), told DW in a December interview that Six had not yet seen a lawyer and that his case was being handled by a military tribunal.

Six had traveled to the region to report on the crisis in Venezuela.

Over the past two years Venezuela has been plagued by violent protests against acting President Nicolas Maduro's attempt to consolidate political power and the worsening economic situation. The conflict came to a head early in 2019, with opposition politician Juan Guaido naming himself interim president.

Many other journalists have traveled to Venezuela to report on the situation, with some being arrested on charges of visa violations.

The United States has accused Cuba of controlling Venezuela's political elite, its army and its intelligence services. Havana denies the claims and has called on Washington to provide evidence. (09.03.2019)

The Venezuelan government questioned Cody Weddle about a segment on dissatisfied military officers that aired last month. A Caracas-based NGO said 49 journalist detentions have taken place in the country this year. (07.03.2019)