Self-declared President Juan Guaido is to step up pressure on the US military to help solve the country's political crisis. The opposition leader has spent months trying to oust Nicolas Maduro from power. 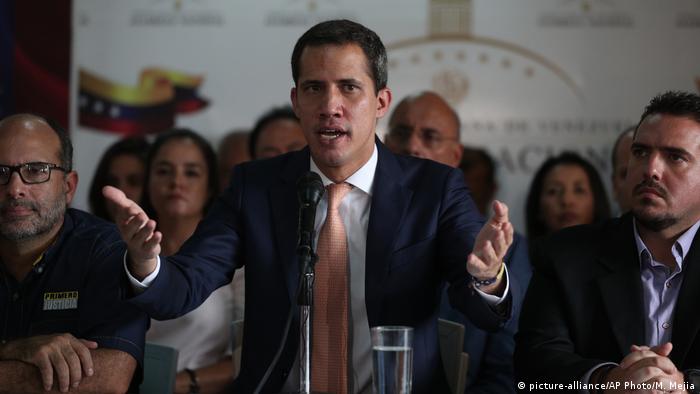 Venezuela's self-declared president Juan Guaido said on Saturday that he had instructed his political envoy in Washington to open relations with the US military with immediate effect.

The opposition leader asked his ambassador, Carlos Vecchio, to meet with Pentagon officials over possible coordination to remove President Nicolas Maduro — whose 2018 reelection Guaido has described as illegitimate — from office.

"We have instructed our ambassador to meet immediately ... with the [US] Southern Command and its admiral to establish a direct relationship," he told a rally in Caracas in support of the opposition-led Congress.

"We have said from the beginning that we will use all the resources at our disposal to build pressure."

The Southern Command is part of the US military responsible for operations and security in Central and South America, along with the Caribbean.

The Trump administration has repeatedly said that "all options are on the table" to end the country's yearslong political crisis. Washington, along with the European Union and most of Venezuela's neighbors, have backed Guaido to take control of the oil-rich nation.

However, Brussels and most Latin American countries have expressed opposition to potential military intervention.

EU foreign policy chief Federica Mogherini said last week that the International Contact Group is prepared to begin a "mission at the political level" in Caracas.

In recent weeks, Guaido has faced several other setbacks in his attempts to take power after an attempted military uprising on April 30 was put down.

This week, his deputy, Edgar Zambrano, was arrested by Maduro's intelligence service and is being held for what the Supreme Court called "the flagrant commission of the crimes of treason, conspiracy and civil rebellion."

Three other lawmakers have sought refuge in various diplomatic facilities in Caracas, while one fled to neighboring Colombia.

Guaido told an Italian newspaper this week that he would "probably" accept a US military intervention if the United States proposed it.

The Southern Command said in a tweet on Thursday that it was prepared to discuss "how we can support the future role" of Venezuelan armed forces leaders who "restore constitutional order," when invited by Guaido.

Russian Foreign Minister Sergey Lavrov met his Venezuelan counterpart for talks in Moscow. Russia has doubled down on its support for Venezuela's President Nicolas Maduro, who the US says should stand down. (05.05.2019)

The self-declared president has urged Venezuelans to protest against a growing government crackdown on opposition figures. The EU has warned the Maduro regime against "silencing" the opposition-held National Assembly. (10.05.2019)

The Maduro-allied court is investigating opposition politicians on suspicion of treason. Meanwhile, the United States said it would lift sanctions on a former intelligence chief who came out in support of the opposition. (07.05.2019)