The vice president of Venezuela's National Assembly, Edgar Zambrano, has been detained and towed to prison in his car. He was apprehended for alleged support of an uprising arranged by opposition leader Juan Guaido. 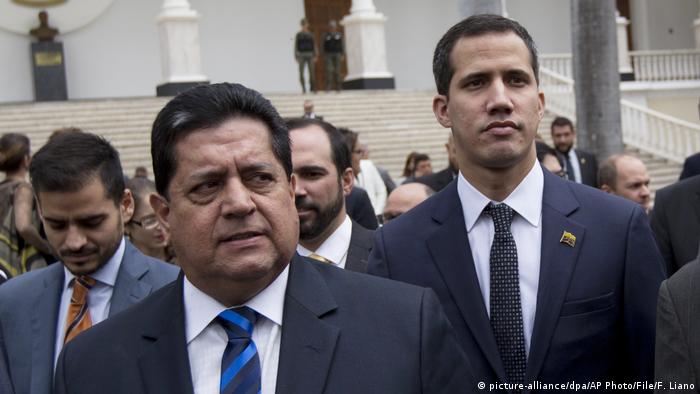 Venezuelan intelligence agents on Wednesday detained Edgar Zambrano, the deputy leader of the opposition-dominated National Assembly, for supporting an attempted uprising on April 30.

Zambrano, opposition leader and self-declared President Juan Guaido's deputy as National Assembly speaker, was detained by agents in Caracas for backing the failed April 30 military uprising against President Nicolas Maduro, which was orchestrated by Guaido.

"We warn the people of Venezuela and the international community: the regime has kidnapped the first vice president" of the National Assembly, Guaido wrote in a Twitter post. "They are trying to destroy the power representing all Venezuelans, but they will not achieve it."

The Constituent Assembly has said it would suspend the immunity of any lawmakers who backed the uprising, which sparked two days of clashes between security forces and protesters.

Zambrano's exact whereabouts were unknown, but he tweeted that at 6:35 p.m. (2235 UTC) he left his party's headquarters and his car was surrounded by intelligence officers.

He wrote that he refused to leave the vehicle, which was subsequently towed with him inside it to the Helicoide, a government building in Caracas used for holding prisoners.

The three lawmakers — named as Freddy Superlano, Sergio Vergara and Juan Andres Mejia — have been accused of high treason and conspiracy.

Their arrests come after a court announced the indictment of seven others on Tuesday.

Guaido, who is recognized as Venezuela's interim president by more than 50 countries, was also stripped of his immunity on April 2.