US urges Venezuela's Maduro to 'open these bridges' 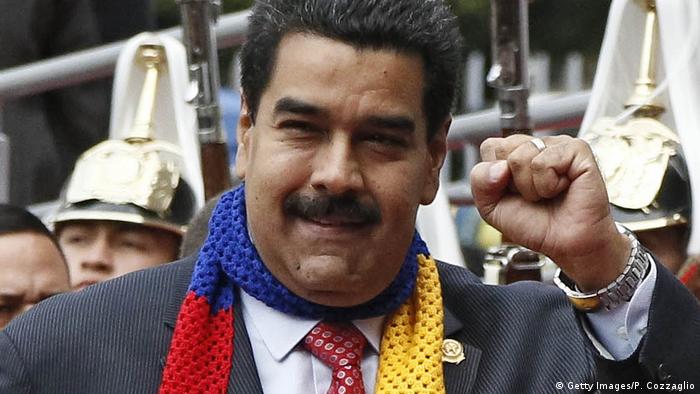 More than 3 million Venezuelans have fled hyperinflation, food and medicine shortages and a political crisis in their homeland. The UN estimates that figure will surpass 5 million by the end of the year.

Imitating US President Ronald Reagan's famous "Tear down this wall" speech in Berlin at the end of the Cold War, Pompeo called on Maduro to "open these bridges, open these borders. You can end this today." He went on to say:

Pompeo 'has come to intimidate us'

The US Secretary of State's visit to Cucuta with Colombian President Ivan Duque came as part of a four-nation South American tour aimed at applying pressure on Maduro.

On the Venezuelan side of the border, Freddy Bernal, a government leader close with the country's Maduro-supporting colectivos community, said Pompeo "has come to intimidate us and give orders to his servant Ivan Duque."

Humanitarian crisis: Maduro has imposed a blockade along Venezuela's borders to prevent humanitarian aid from Colombia, Brazil and the Dutch Caribbean from entering the country. The acting Venezuelan president associates the aid with a US invasion and has cited US sanctions as the reason for the country's economic woes. Authorities in Venezuela have also accused Washington of attempting to overthrow Maduro and even blamed it for an electrical grid failure last month that left the country without power for days.

Political crisis: In January, opposition leader Juan Guaido declared himself Venezuela's interim president, a move aimed at forcing Maduro out of office. The United States was one of the first countries to recognize the moves and more than 50 other nations — including Germany — have since followed suit. But the support for Guaido has not loosened Maduro's grip on power, as the embattled leader continues to enjoy support from the armed forces.

Venezuelan authorities have taken the Spanish channel of Germany's international broadcaster off air. DW Director General Peter Limbourg has called on them to reinstate it — but also gave tips to viewers on access. (14.04.2019)

A group of Venezuelan refugees are making the grueling journey all the way to Peru, in part thanks to their lucky charm coconut, "Wilson." (13.04.2019)