"The time has come" for the UN to recognize Juan Guaido as the real president of Venezuela, US Vice President Mike Pence told the international assembly. The US is pushing a resolution on the issue, despite long odds. 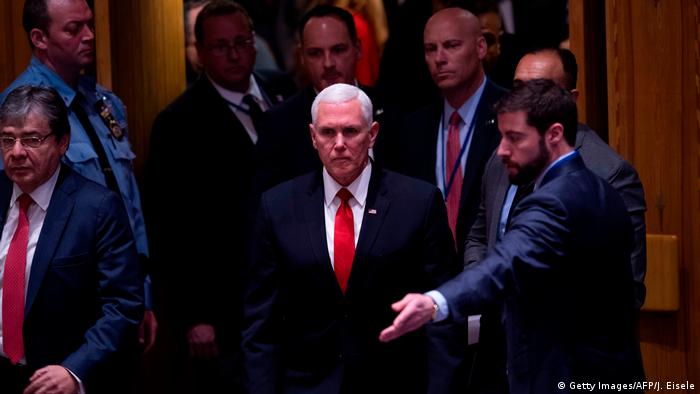 The UN should admit a representative of Juan Guaido's Venezuela government in place of the envoy appointed by Nicolas Maduro, US Vice President Mike Pence told international representatives on Wednesday.

"The time has come for the United Nations to recognize interim president Juan Guaido as the legitimate president of Venezuela and seat his representative in this body," Pence added.

Venezuela's parliamentary speaker Juan Guaido declared himself interim president in January, claiming that his rival Nicolas Maduro had lost legitimacy. The US, its European allies, and dozen of other countries have endorsed the move.

On Wednesday, Pence said the US was preparing a draft resolution which would see the UN recognize Guaido as president and replace the current Venezuelan ambassador with a new one, appointed by Guaido.

The US leader called on the UN to revoke the credentials of the current Venezuela representative Samuel Moncada. He also addressed Moncada directly during his UN speech.

"With all due respect Mr. ambassador, you shouldn't be here," Pence told the envoy who attended the Wednesday session. "You should return to Venezuela and tell Nicolas Maduro that his time is up. It's time for him to go."

The US move comes just a day after the Organization of American States (OAS) voted to recognize Guaido's ambassador.

However, it was extremely unlikely that the UN Security Council would approve the US-proposed resolution. The left-leaning leader Nicolas Maduro still enjoys strong support from China and Russia, with the latter involved in key oil-related projects in Venezuela.

Following Pence's speech, Russia's UN envoy Vassily Nebenzia said that the US had "artificially provoked a crisis" in Venezuela in order to overthrow "a legitimately elected leader and replace him with their own pawn."

"If you want to make America great again, and we're all sincerely interested in seeing that, stop interfering in the affairs of other states," Nebenzia told US officials.

No IMF transactions for Venezuela

But the International Monetary Fund (IMF) said on Wednesday that it would not allow Venezuela access to the reserves it holds there, until the leadership situation was straightened out.

"Any IMF engagement with Venezuela, including responding to potential financial transaction requests, is predicated on the issue of government recognition being clarified," an IMF spokesman said.

This means that neither Guaido nor Maduro would be able to enter negotiations with the IMF for an aid program, drifting Caracas further away from such measures that could alleviate its economic problems.

Over 3.4 million Venezuelans have left the country, and the number of refugees is expected to hit five million until the end of 2019, he added.