US to announce retaliatory measures against Russia over election hacks | News | DW | 29.12.2016

US to announce retaliatory measures against Russia over election hacks

Several reports have said the Obama administration plans to announce retaliatory measures against Russia for allegedly interfering in the US election. Moscow has said it will retaliate should measures be approved. 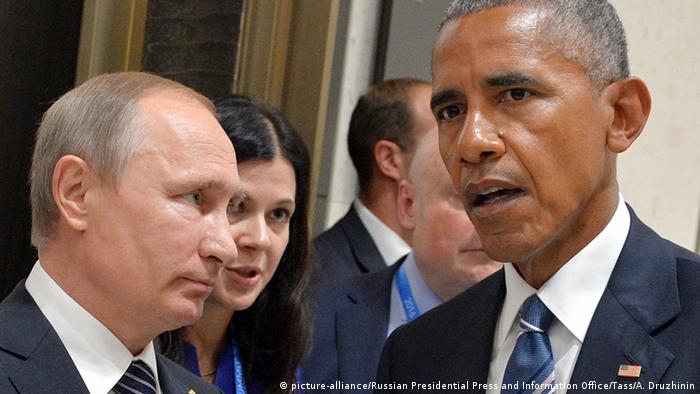 The outgoing administration of US President Barack Obama is set to implement a series of retaliatory measures against Russia for its alleged meddling in the US election, several reports said Wednesday.

The announcement could be made as soon as Thursday, reported the Reuters news agency, citing two US officials.

"The Washington Post" cited its sources as saying the measures could include economic sanctions, diplomatic censure and possibly cyber operations. The names of people tied to a Russian disinformation campaign that allegedly targeted Democratic candidate Hillary Clinton's campaign may also be released, CNN reported.

A Western intelligence source has told French newspaper Le Monde that Russian hackers APT28 were behind the breach. The OSCE has said that all systems are now safe. (28.12.2016)

At his annual end-of-year press conference, Russian President Putin bemoaned US Democratic Party members for "accusing someone else" for their election defeat. He has also called Donald Trump's nuclear comments "normal." (23.12.2016)

The hack into a Ukraine military app has reinforced claims the cyber unit known as "Fancy Bear" has a direct Kremlin link. It also reinforces US intelligence reports linking the Kremlin to cyber attacks in the US. (22.12.2016)

One decision that has been finalized is to avoid any moves that exceed the Russian election hacking and risk an escalating cyber conflict, the sources told Reuters on condition of anonymity.

US officials said the point of the retaliatory steps was not to punish, but to deter similar cyber attacks or actions in the future.

Three US intelligence agencies concluded that Russia was behind hacks into the Democratic Party and leaked documents ahead of the November 8 presidential election. The agencies also agree that Russia sought to intervene to help President-elect Donald Trump and other Republican candidates into office.

"To be honest, we are tired of lie about the 'Russian hackers,' which is being poured down in the United States from the very top," said spokeswoman Maria Zakharova.

She also called the reports a "provocation directed by the White House." Both Russia and Trump have denied and dismissed the US intelligence reports.

Two Republican senators, John McCain and Lindsey Graham, called for even harsher action against Russia in remarks made to Fox News.

Along with increasing economic sanctions, McCain also pushed for a permanent US military presence in the Baltic states of Estonia, Latvia and Lithuania, and for arming Ukraine with weapons.

The Obama administration already warned Russia via diplomatic channels prior to November's election.

One week before the election, Washington used a special crisis communication channel for the first time to send a message to Moscow, asking it to stop targeting state voter registration and election systems. US officials said Russia apparently complied after receiving the message.