US shoots down 'pro-Syrian regime' drone amid rising tensions

The Iranian-made drone had displayed "hostile intent" while approaching an allied outpost, the US-led coalition reported. The coalition said it would not "tolerate any hostile intent and action of pro-regime forces." 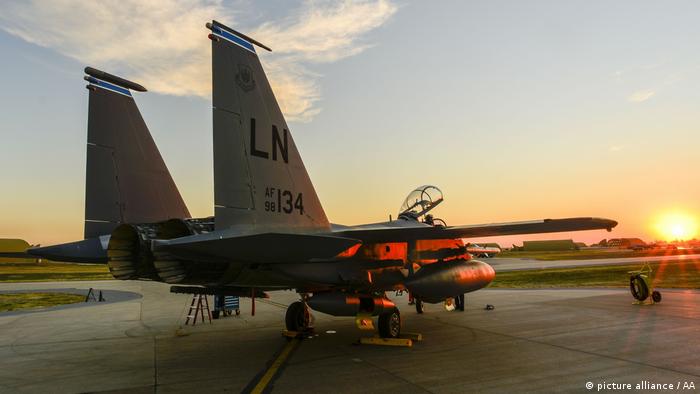 Operation Inherent Resolve, the US-led coalition against the "Islamic State" (IS) militant group, announced on Tuesday that American forces shot down an armed "pro-Syrian regime" drone "after it displayed hostile intent."

A US F-15E (pictured above) warplane shot the Iranian-made drone after "it was observed advancing on the coalition position."

Read more: Are the US and Russia inching toward confrontation in Syria?

"When the armed UAV (drone) continued to advance on the coalition position without diverting its course, it was shot down," said a statement from Operation Inherent Resolve.

The incident marks the third time US-led forces have shot down an aircraft affiliated to the government of Syrian President Bashar al-Assad in June.

On Sunday, the US military downed a Syrian warplane near Raqqa after the aircraft dropped munitions near the US-backed Syrian Democratic Forces battling to recapture the city from IS.

The move raised tensions between the Syrian government and its allies on one side and the US-led coalition on the other. Russia suspended a military backchannel and on Monday threatened to target coalition aircraft that traveled west of the Euphrates River. But the US remained steadfast in its decision, saying the coalition would not "tolerate any hostile intent and action of pro-regime forces."

"The coalition presence in Syria addresses the imminent threat ISIS in Syria poses globally," the statement said. "The coalition does not seek to fight the Syrian regime, Russian or pro-regime forces partnered with them, but will not hesitate to defend the coalition or partner forces from any threat."

More than 300,000 people have been killed and half the population in Syria displaced since 2011, when regime forces launched a brutal crackdown on peaceful protesters calling for the release of political prisoners and for Assad to step down.

Since then, it has fractured into a multi-faceted conflict involving global superpowers, regional actors, terrorist organizations and rebel groups.