As a result of US sanctions, Iranians can no longer afford the yearly pilgrimage to Iraq's Shiite shrines. The holy city of Najaf is bearing the economic brunt. Judit Neurink reports from Najaf. 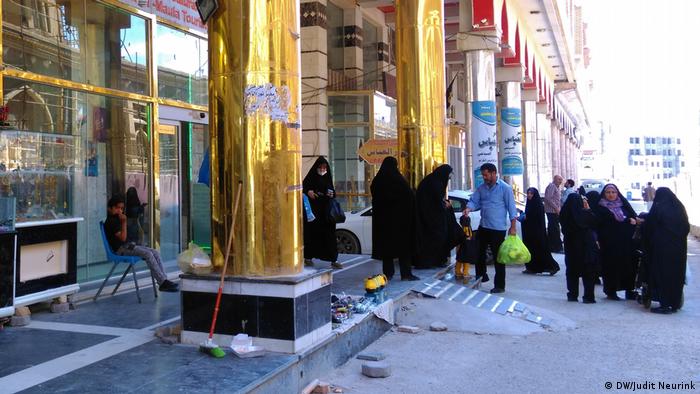 "Not many Iranians can afford to come, not since Trump's decision, and we are losing money as a result." Badr al-Jilawi owns the Qasr al-Assad Hotel, which stands close to one of the world's most holy Shiite sites, the Imam Ali Shrine in the Iraqi city of Najaf. Apart from a group of women in black in the lounge, the normally bustling hotel is empty, a direct result of America's embargo on Iran.

But at least this hotel is still open. Over the past year or so, some 500 of Najaf's 700 or so hotels have closed their doors, along with many of its restaurants. The economic fallout from the US sanctions against Iran has been serious, and most Iranians have had to scrap their yearly pilgrimage to the Iraqi holy sites. Which is why Al-Jilawi has lost about 90% of his income. "I have had to move extra beds into the rooms and rent them out for $3 (€2.6) a night per bed. I never thought I would fall so low. Back in the good times, my hotel rooms cost $100 each."

Najaf is almost completely dependent on religious tourism from Iran, which only started in earnest after the fall of the Iraqi dictator Saddam Hussein in 2003. He considered the Iranians the enemy, having fought an eight-year war against them in the 1980s. But when the Shiite majority came to power in Baghdad, the restrictions were dropped and Iranians started to pour into Iraq in their millions.

For Najaf, the change was enormous. From a desperately poor town with some 50 hotels to cater for very restricted religious tourism, it developed into a city with high-rise buildings, shops, hotels and restaurants catering to a huge volume of tourists. Nonetheless, the community soup kitchens were still needed at times to help feed all the pilgrims. Now they mainly feed the many Iraqi victims of the US embargo on Iran.

But the embargo might prove more painful yet, and for the whole of Iraq. Sixteen years after Saddam's fall, Iraq still cannot produce enough energy to cover its needs and is dependent on gas and electricity imports from Iran. And while Washington is allowing these to continue, for the time being at least, this concession is due to end this month. Baghdad has already communicated the need to increase the amount of Iranian electricity it imports during the coming summer — a need exacerbated by years of violent demonstrations in the southern city of Basra against the lack of electricity available during the hot and humid summer.

This is also why the Iraqi government has vowed to remain neutral in the conflict between the US and its neighbor. Both exert considerable influence in Baghdad. The Americans helped to build a new government and army after Saddam, to fight the "Islamic State" group and to rebuild after it was defeated. Iran supports political parties and militias, both financially and otherwise. In addition to gas and electricity, it also exports food staples, fruit and vegetables to Iraq, which the south of the country is now dependent on. 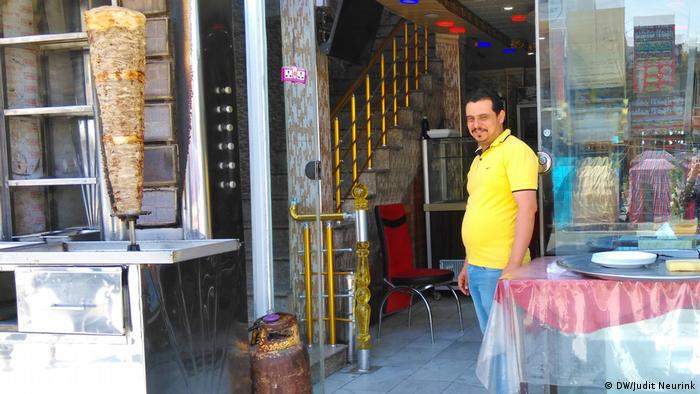 Like many others in the food industry trade, Hamid Abbas is feeling the pinch

That dependency is most visible in Najaf, where Trump's name is on everybody's lips as the root cause of all their troubles. "The Americans aren't only punishing Iran, they're punishing Iraq, too, because we are losing customers and money," says Said Ali Mossawi, a co-owner of a Najaf restaurant that usually caters to tourist groups. Like they have been for months, the rows of tables are empty this lunch time.

Mossawi says he has lost over half his customers and has had to sack about 40% of his staff. "And I am not completely dependent on the Iranians. Imagine what it is like for those who don't work with Iraqis or pilgrims from other countries." Only the Iranians came in huge numbers and throughout the year. In the mostly empty streets around Najaf's holy shrine, some Lebanese women are sheltering from the sun, but Shiites from countries like Pakistan, India, Bangladesh and the Gulf States mainly visit during the religious festivals.

Not everyone in Najaf was happy with the hordes of people that flocked into their city, but nobody is complaining anymore. The exchange rate for the Iranian toman on which they grew rich has dropped as a result of US policy, and hardly any are now spent in Najaf. Skeletons of unfinished buildings clutter the city center, where only the odd bus drops off groups of Iranian women covered in their black chadors.

"They even bring their own food and cook it themselves," says kebab shop owner Hamid Abbas, who has not had any Iranian customers for a while. "After Trump's decision, none of the Iranians eat in the restaurants anymore." His income has fallen by 40%, but he remains hopeful. "When the problems are over for Iran, they will be over for us too." 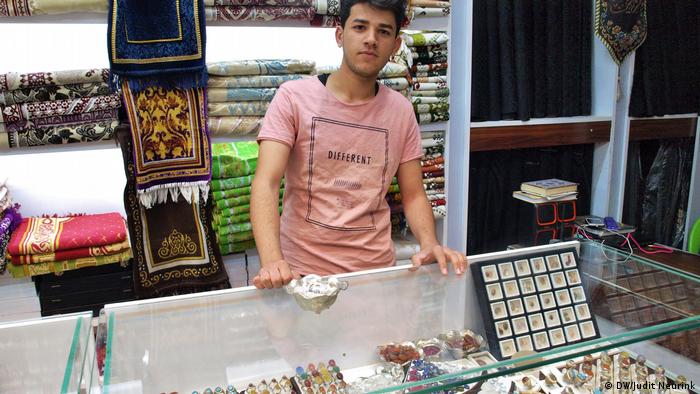 Ahmed Ali has had to adapt to the lack of customers

For 17-year-old Ahmed Ali, who sells precious stones for rings and jewelry in one of Najaf's many bazaars, the fall in his income may be as high as 85%. Iranians favored a special white stone that is almost transparent, as it can only be found in the holy city, but he hasn't sold one for months now. "I have had to adapt," he says, pointing to the jewelry that now fills his shelves, which is designed to appeal to the tastes of pilgrims from other countries.

Iraq has tried to stop the downward spiral by agreeing to give Iranians their Iraqi entry visa for free. Unfortunately, this measure has failed to bring any visible results, say those affected in Najaf. "In Iran, a chicken costs about 15 toman (€0.0031, $0.0035) here the price is over 100," explains kebab shop owner Abbas.

But jewelry seller Ali, like many Najafis, hasn't given up hope just yet. "As soon as Trump allows them, they will come back."