US plans regular Ramstein Air Base meetings on Ukraine

Washington said it would hold talks on a roughly monthly basis in Germany with allies inside and outside NATO. Berlin announced a major shift in policy at the event, saying it would send tanks to Ukraine. 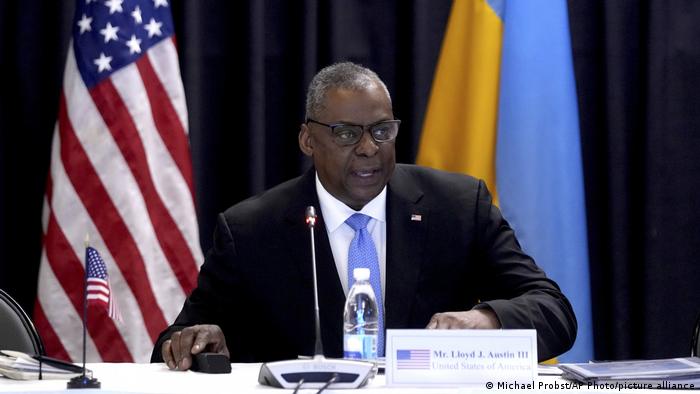 The US hosted dozens of countries at the Ramstein US air base in western Germany on Tuesday for a conference on bolstering Ukraine's defense capabilities as it battles Russia's invasion.

The conference secured pledges from allies to sustain aid to Ukraine's military throughout this next phase of the war — and beyond. The meeting saw a major pledge from Germany, which said it would deliver tanks to Ukraine in a radical switch in policy on the supply of military equipment to the country.

US Defense Secretary Lloyd Austin said, "We do want to make it harder for Russia to threaten its neighbors and make it less able to do that."

Austin added the conference would transform into a monthly contact group on Ukraine's self-defense.

What is the goal of the conference?

The aim is to secure Ukraine's long-term security and sovereignty in terms of how it will defend itself after the war. The US has invited defense ministers and representatives from 40 countries to participate — with NATO Secretary General Jens Stoltenberg also in attendance.

As he opened the talks, US Defense Secretary Lloyd Austin said the conference sought "to help Ukraine win the fight against Russia's unjust invasion and to build up Ukraine's defenses for tomorrow's challenges."

"As we see this morning, nations from around the world stand united in our resolve to support Ukraine in its fight against Russia's imperial aggression," Austin said.

"Ukraine clearly believes that it can win and so does everyone here," he added.

The event is not being held under NATO auspices, with countries outside the alliance also invited.

Austin and US Secretary of State Antony Blinken visited Kyiv on Sunday, where they met President Volodymyr Zelenskyy. At the meeting, they agreed to provide Ukraine with additional military assistance.

Ukraine also reportedly gave information about its defense needs, with the details among the issues to be discussed at the conference.

Since the threat of war first loomed, Zelenskyy has been asking the West to do more —  including sending artillery and fighter jets — to help Ukraine fend off Russian attacks.

The German government on Tuesday confirmed reports that it would approve a delivery of anti-aircraft tanks to Ukraine.

German Defense Minister Christine Lambrecht announced the move during opening remarks at Ramstein air base, coming at the start of the conference.

Lambrecht also said Ukrainian soldiers were being be trained to use artillery systems in Germany.

"We are working together with our American friends in training Ukrainian troops on artillery systems on German soil," she said.

One the sidelines of the conference, the minister said Berlin was committed to working with NATO to help deliver what was necessary for Ukraine.

"German policy is always based on not going it alone but coordinating with our partners," said Lambrecht.

"We have delivered whatever is possible from the stocks of the Bundeswehr. Whatever Ukraine needs and whatever we have agreed with our allies, we will deliver."

Critics have criticized Chancellor Olaf Scholz for his refusal to send heavy weapons directly to Ukraine, citing concerns about provoking a wider conflict between NATO and Russia.

The chancellor has faced criticism from within his own coalition government, a partnership between his center-left Social Democrats, the Greens and the neoliberal Free Democrats.

A document now submitted by the coalition parties to Germany's parliament says Berlin will "continue and, where possible, accelerate the delivery of necessary equipment to Ukraine, including extending the delivery of heavy weapons and complex systems."

What have other countries pledged?

Austin and Blinken on Monday announced $713 million (€667 million) in foreign military financing for Ukraine, with the aim of helping it transition to more advanced weaponry, in particular when it comes to air defense.

Austin said the US believed Kyiv could win the war against Russia, if it has the "right equipment."

The Pentagon recently promised 90 of the US Army's most modern howitzers to Ukraine, along with 183,000 rounds of artillery and other sophisticated weaponry. The US is also arranging more training for Ukrainians on the new weaponry.

The UK says it has distributed more than 200,000 items so far, including 4,800 NLAW anti-tank missiles, and a small number of Javelin missiles. It has also provided Starstreak anti-air missiles and tanks.

France is sending its Caesar mobile howitzer, and the Czech Republic is delivering its older self-propelled howitzers.

As well as also sending howitzers, Canada is to deliver guided "Excalibur" shells that can travel more than 40 kilometers (25 miles) and deliver precisely targeted munitions.