US military raid in Yemen kills civilians and al Qaeda militants | Middle East | News and analysis of events in the Arab world | DW | 29.01.2017

In the first confirmed US raid under Donald Trump's presidency, at least 14 militants were killed in Yemen, along with a US soldier and several civilians. 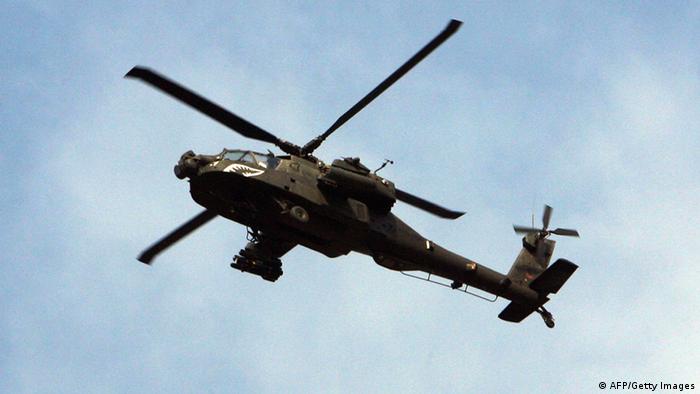 A US military raid in Yemen killed several suspected al Qaeda militants, US authorities confirmed on Sunday, while several sources alleged that up to 16 civilians were also killed.

US Central Command confirmed the raid, saying one US soldier died and three were injured, while 14 militants were killed. An al Qaeda member, speaking to the Associated Press, described the attack as a "massacre" and said women and children had been killed. The member of the terror group sent photos purportedly showing the bloodied bodies of several children allegedly killed in the raid.

Before the arrival of commandos, about 20 Apache helicopters and drones flew over the area and attacked a school, a mosque and a jail, considered to be the headquarters of the terrorist members, several neighbors told agency EFE.

"The operation began at dawn when a drone bombed the home of Abdulraoof al-Dhahab and then helicopters flew up and unloaded paratroopers at his house and killed everyone inside," one resident told Reuters, speaking on condition of anonymity.

"Next, the gunmen opened fire at the US soldiers who left the area, and the helicopters bombed the gunmen and a number of homes and led to a large number of casualties."

According to the villagers and unnamed security sources who spoke with AP, three prominent members of the al Qaeda group were killed: Abdul-Raouf al-Dhahab, his brother Sultan al-Dhahab; and either Seif al-Yufi or Seif al-Nims.

The al-Dhahab family is considered an ally of al-Qaida, which security forces say is concentrated in Bayda province. A third family member, Tarek al-Dhahab, was killed in a US drone strike several years ago.

US Central Command said service members taking part in the raid captured "information that will likely provide insight into the planning of future terror plots."

It was the first military raid in Yemen attributed to the United States since President Donald Trump took office on January 20. Yemen was one of the seven Muslim-majority countries listed on Trump's immigration ban.

In 2014, US Special Forces attempted to rescue an American and a South African hostage held by al Qaeda in another part of the country, but the captives were killed in the subsequent firefight.

Both al Qaeda and the so-called "Islamic State" have exploited the deterioration of security in Yemen, caused by an ongoing conflict between forces loyal to President Abdo Rabu Mansur Hadi and Houthi rebels, to expand in the southern areas of the country.