Opinion: Only good and bad in Syria?

The battle for Aleppo is over. The Syrian civil war is not. Matthias von Hein says that propagandizing against Moscow, Tehran or Damascus is counterproductive - because the true picture is gray, not black and white. 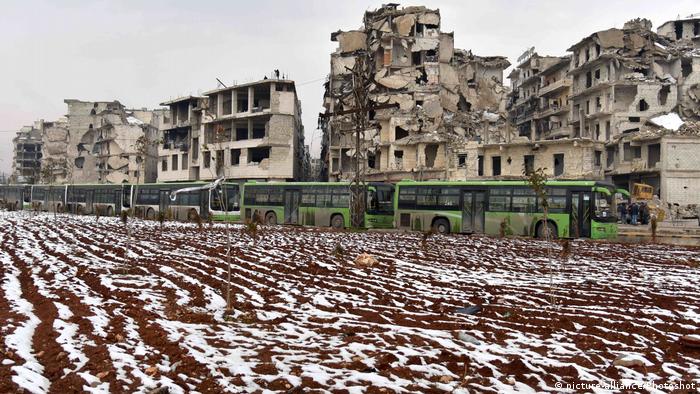 We've heard it said so many times before. Yet now, again, in the Syrian civil war, we must remember that the first casualty of war is always truth. Although clever twisting of the truth is more successful than a barefaced lie; and selective presentation is the most effective way of massaging opinion in a particular direction.

The battle for Aleppo is a current example. Our screens showed us, almost exclusively, air attacks by the Syrian and Russian air forces on residential areas of Aleppo. There was extensive illustration of the barbarism that did indeed lie behind this, the cynicism of Assad and his supporters, their willingness literally to walk over corpses. The alarming humanitarian situation in the besieged city was constantly emphasized.

But where was the information that the rebels acted just as cynically? They abused people by using them as human shields. They repeatedly prevented the inhabitants of East Aleppo from fleeing to the western part of the city. And they too fired rockets and mortars into areas in the western part with no consideration whatsoever for the civilian population.

Speaking of the rebels: These consisted primarily of Salafist jihadist groups. So another part of the truth is that there were no democrats in East Aleppo. In many quarters, Sharia law had been imposed; women there were allowed out on the street only if they were veiled. The main difference between this and so-called "Islamic State" is that IS wants a worldwide caliphate. The Syrian jihadists are, for the time being, content with a Syrian one.

It's not just Syrian or Russian propaganda saying this. Colonel Steve Warren, the spokesman for the US military intervention against IS, Operation Inherent Resolve, says the same. On 16 April 2016 he told a press conference that East Aleppo was held primarily by the al-Nusra Front.

Weapons for all those against Assad

Anyone seeking a higher-ranking witness should look at a speech given by US Vice-President Joe Biden at Harvard in October 2014. Not only did a frustrated Biden explain that there was no moderate center in Syria, the vice-president also publicly complained that America's allies Turkey and Saudi Arabia were also its biggest problem in Syria. Biden went on to explain that both countries were obsessed with toppling Assad. They had, he said, distributed hundreds of millions of dollars and thousands of tons of weapons to anyone wanting to fight against Assad. The problem was that these opponents were al-Nusra, an offshoot of al Qaeda, and jihadist extremists from other parts of the world.

As early as 2012 the US military's Defense Intelligence Agency (DIA) warned in an analysis that the originally peaceful and democratic protest in Syria was now dominated by Islamists. The paper was already warning then of the possible emergence of a Salafist state. Two years later, in 2014, IS declared precisely that. The head of the DIA at that time was, incidentally, Michael Flynn, whom Donald Trump has - controversially - named his national security adviser.

What does this mean for those reporting on Aleppo, on Syria? The need for skepticism, above all, and an honest effort to provide a comprehensive picture. Of course the media must present the cruelty of war. Including the fighting, suffering and death in East Aleppo. But if they're serious about task of providing information, that information should not be one-sided.

People are suffering and dying in Mosul, too

Around 700 kilometers (434 miles) from Aleppo another city is under siege: Mosul in northern Iraq, home to around a million people. There too civilians are dying. Half a million people have no access to drinking water. In this cold winter they lack both food and fuel. Here, though, the besieging army is a coalition supported by the West. Just like before, when the cities of Ramadi and Fallujah were liberated from IS - cities that were 80 percent destroyed in the process. Of this we are seeing, and have seen, very little. Just as we have seen little of the use of cluster bombs in Yemen. As recently as the beginning of December, a Saudi-led coalition bombarded two schools with cluster munitions.

Injustice must always be denounced, no matter who commits it. Selective presentation is propaganda. Conflicts like the one in Syria don't need emotions whipped up; what they need is the reporting of sober facts. It may not read as well, but that means: less black and white, more gray.

Have something to say? You can leave a comment below.

Russia's military has found a mass grave of Syrians, allegedly killed by rebel groups ahead of last week's evacuation. An independent monitoring group could not confirm how they died. (26.12.2016)

Wanting to show their solidarity with the people of Syria, a group of Europeans are to walk to Aleppo from Berlin after Christmas. The 'Civil March for Aleppo' is the initiative of a Pole living in the German capital. (23.12.2016)

US commander signals new advance against 'IS' in Iraq's Mosul

US Lieutenant Colonel Stuart James said Iraqi forces would resume their push against 'Islamic State' (IS) forces in Mosul in the coming days. US troops are to be deployed closer to the front line. (26.12.2016)

Coronavirus 'still has the upper hand,' warns WHO Europe head 4h ago

Opinion: Biden lifts Putin out of international isolation 10h ago