Kamala Harris' tour of Southeast Asia comes at a time of a humiliating withdrawal of American troops from Afghanistan. 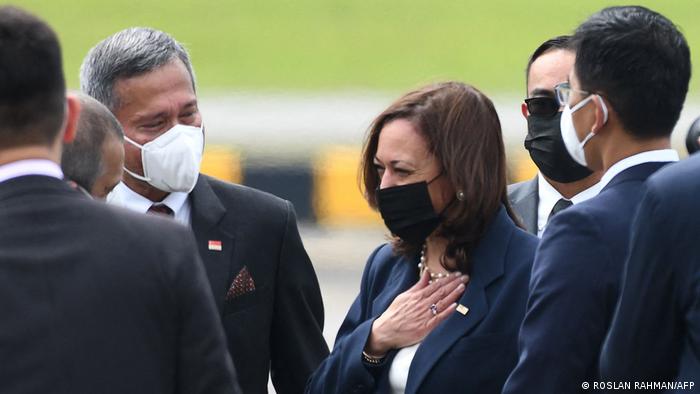 US Vice President Kamala Harris arrived in Singapore on Sunday, kicking off her trip to Southeast Asia where she is expected to offer reassurances of Washington's commitment to the region.

The vice president's visit come just days after the chaotic withdrawal of US troops from Afghanistan and the subsequent takeover of the country by the Taliban.

The return to power of the hardline Islamists in the conflict-ridden country has dented the United States' credibility and cast a shadow over its resolve to defend its values.

During her visit, which began on Friday and includes stops in Singapore and Vietnam, Harris will likely seek to allay concerns about US dependability.

The trip will also provide Harris, an Asian-American whose mother was of Indian-origin, a forum to assert herself directly in foreign affairs.

The longtime district attorney and former senator is largely untested in diplomacy and foreign policy.

The vice president will meet Singapore's leaders Monday, including the president and prime minister.

She will then make a stop at the Changi Naval Base, where she'll address US sailors aboard the visiting USS Tulsa.

First US VP in Vietnam

Harris will arrive in Hanoi late Tuesday. She will hold government meetings and attend the opening of a Southeast Asian branch of the US Centre for Disease Control.

However, her visit to the communist country has been particularly criticized for being tone deaf, as the US struggles to evacuate Americans and Afghan allies out of Kabul.

Visuals of the chaotic US evacuation from Kabul last week drew comparisons with a similar image of Saigon in 1975 where US helicopters ferried the last evacuees from the embassy roof.

US officials said the trip was planned long before the collapse of Afghanistan and the main focus will remain Washington's broader strategic goals in Asia.

In Hanoi, Harris will join a virtual meeting of Southeast Asian officials which will focus on the coronavirus pandemic.

Her trip aims to establish deeper ties with the region that Washington considers key to checking Chinese expansion.

It comes against the backdrop of an increasingly assertive China challenging US hegemony in the Indo-Pacific region.

Correction: An earlier version of this article incorrectly stated that Kamala Harris would be the first US vice president to visit Vietnam. That has been corrected.

US: Kamala Harris in Guatemala warns migrants 'do not come'

The US vice president has cautioned migrants on her first trip abroad since taking office. She is talking migration, corruption and investment with Guatemalan and Mexican leaders.