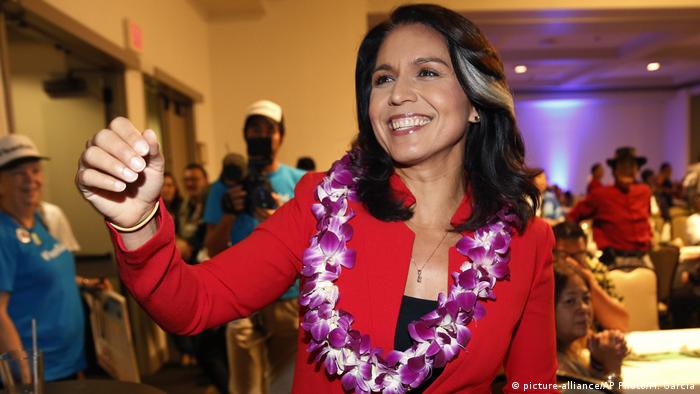 Former US Secretary of State and Democratic presidential nominee Hillary Clinton has returned to warn that Russia, which interfered in her 2016 loss, may attempt to recruit a fringe Democrat for a third-party run in 2020. Clinton stopped short of mentioning Hawaii Congresswoman Tulsi Gabbard by name during an appearance on the Campaign HQ With David Plouffepodcast released late Thursday.

Clinton said Kremlin officials had "their eye on somebody who's currently in the Democratic primary and are grooming her to be the third-party candidate." Five women remain in the race. Senators Elizabeth Warren, Kamala Harris and Amy Klobuchar enjoy broader backing than the isolationist candidate from Hawaii; spiritual guide Marianne Williamson would have little value for Moscow.

Gabbard called Clinton the "personification of the rot that has sickened the Democratic Party for so long." In several tweets on Friday, she also alleged there has been a "concerted campaign" to destroy her reputation since she announced her presidential run in January.

During Tuesday's Democratic debate, Gabbard said the Times published "smears" and called CNN "completely despicable" for allowing a commentator to label her "an asset of Russia."

Can Trump carry Michigan again in the 2020 election?

Officials concluded that Russia interfered in the 2016 election to boost Trump's chances of winning the presidency. Clinton said Kremlin officials knew that they couldn't help the immensely unpopular Trump win reelection without a third-party candidate to siphon votes from the Democrats, which is why they would need to recruit one. Clinton called the unnamed Democrat "the favorite of the Russians."

"They have a bunch of sites and bots and other ways of supporting her so far," Clinton told Plouffe, who served as former President Barack Obama's campaign manager when he beat her for the 2008 Democratic nomination and later John McCain for the presidency.

"That's assuming Jill Stein will give it up, which she might not because she's also a Russian asset," Clinton said. The Green Party candidate, who received 1% of ballots in 2016, may have won enough votes in competitive states to tip the election to Trump. In 2016, Stein won more votes than Trump's margin of victory in Michigan, Wisconsin and Pennsylvania — three states that would have secured the presidency for Clinton had she won them.

Clinton called Trump, who lost the popular vote to her by nearly 3 million votes but was handed the presidency thanks to a handful of competitive states with slim margins in the 2016 election, "Vladimir Putin's dream." She said Trump's inauguration speech, delivered two months after the shocking election, had sounded "like a declaration of war on half of America."

Germany's far-right AfD has been forced to issue a statement admitting it falsely accused the Environment Ministry of donating millions to Hillary Clinton's election campaign. The claims were made by party board member. (30.07.2018)