US Secretary of State John Kerry has faced pressure at home as he looks to seal a comprehensive deal to curb Iran's nuclear program. The two sides are up against a June 30 deadline to finalize the agreement. 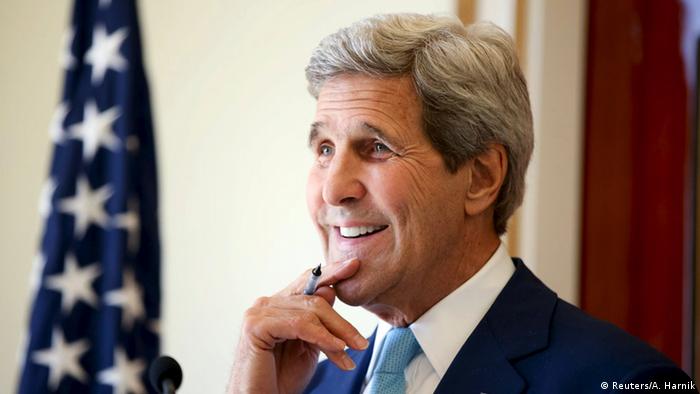 John Kerry is scheduled to fly to the Austrian capital, Vienna, on Friday, ahead of weekend talks that are also to be attended by top diplomats from the rest of the so-called P5+1 group - the five permanent members of the United Nations Security Council - plus Germany.

They are to be sitting across the negotiation table from the Iranian delegation, led by Foreign Minister Mohammed Javad Zarif, as the two sides try to finalize a deal that would see Tehran accept curbs designed to prevent it from developing a nuclear weapon, in exchange for a lifting of economic sanctions.

Teams of experts have spent the past several weeks in Vienna trying to iron out the differences standing in the way of a final deal, along the lines of a framework agreement reached in the Swiss city of Lausanne on April 2.

Concerns about possible past military research

However, several prominent US figures have raised concerns after a recent comment by Kerry, in which he said Washington was "not fixated" on past Iranian nuclear activities - and was looking to the future instead.

The Reuters news agency, though, cited an unnamed "Western source closed to the talks," who said that Kerry had spoken to Zarif in recent days to ensure that Tehran understood that Washington was not climbing down on a demand that Iran come clean on possible previous nuclear military research.

"Kerry called Zarif and told him the past does matter and the US was insisting that the PMD (possible military dimensions) issue be resolved in the negotiations," the source said.

US officials have previously said that Iran must answer all questions posed to it by the United Nations' nuclear watchdog about any past nuclear military research activities before a deal can be signed.

The AFP news agency cited an unnamed senior US official who confirmed that there was no change in policy, saying that "sanctions-lifting will only occur as Iran takes the nuclear steps agreed, including addressing" possible military dimensions.

But such words don't appear to have satisfied critics of the proposed deal in the US, particularly among Republicans.

"I have become more and more concerned with the direction of these negotiations and the potential red lines that may be crossed," Senator Bob Corker, the chairman of the Senate Foreign Relations Committee said.

"There is tremendous skepticism about this deal... and some Democrats from heavily pro-Israel communities are going to have a tough time with this," Republican Senator John McCain said.

There have also been words of caution from prominent figures with ties to President Barack Obama, from his first term in office.

In an open letter signed by figures including former advisor to Obama on Iran and the Middle East Dennis Ross, and David Petraeus, a former CIA Director and US military commander in Iraq, the president was cautioned that any deal would "fall short of meeting the administration's own standard of a good' agreement" if it did not include a tough line on UN nuclear inspections and conditions for sanctions relief.

The formal deadline for reaching a comprehensive deal is June 30, but AFP on Thursday cited a senior US official who said he thought that deadline could be missed by a few days.

"What matters here is the substance of the deal and we have to get it right," the official said.

Iran's supreme leader Ayatollah Khamenei has ruled out freezing the country's sensitive nuclear work for a long period. He has asked for sanctions to be lifted "immediately" if a nuclear deal is signed. (23.06.2015)

Germany's top diplomat has expressed certainty that a final deal with Iran is only days away. His French counterpart, however, has said an agreement is only possible if Iran allows "an extensive regime of verification." (22.06.2015)

A controversial Iranian bill, if enacted, could complicate ongoing talks in Vienna between Iran and international negotiators. The talks have until the end of the month to reach a deal on Tehran's nuclear program. (21.06.2015)