U. S. Secretary of State John Kerry on Wednesday warned that there would be no deal with Iran if it fails to satisfy all lingering questions about its nuclear program. Kerry will travel to Vienna on Friday. 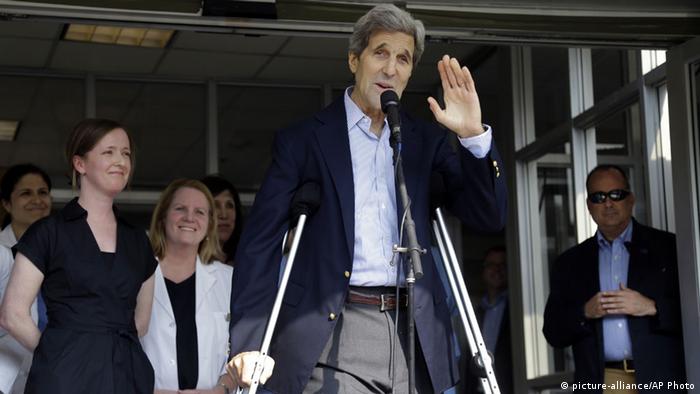 In what is set to be the last phase of diplomatic discussions to stop Iran from acquiring a nuclear bomb, the State Department announced that Kerry would be leaving for Vienna on Friday.

"It may be that the Iranians will not fill out the full measure of what was agreed on in Lausanne, in which case there will not be an agreement," Kerry told reporters.

Kerry was referring to the framework of a deal to stop Iran from getting a nuclear bomb that was agreed on back in April 2 in Switzerland. There, Tehran pledged to cut back its nuclear activities in return for a lifting of international sanctions.

Iran and the six world powers known as the P5+1 -- Britain, China, France, Germany, Russia and the United States – who are negotiating the deal have set themselves a June 30 deadline to agree on one of the world's most complicated nuclear non-proliferation treaties.

Iran needs to satisfy the world that its nuclear program is entirely peaceful. According to Kerry, that "will be determined in the last days, by whether or not the outstanding issues that we've been very clear about are in fact addressed. If they are not addressed there won't be a deal."

The overseas trip will be the first one for the 71-year-old Kerry since he fell off his bike in late May after a round of talks with his Iranian counterpart Mohammad Javad Zarif and broke his right leg. He is still walking on crutches.

Iran's supreme leader Ayatollah Ali Khamenei on Tuesday restated his red lines for a deal which include the immediate lifting of US and UN sanctions on banking and the economy.

He also refused a key international demand that UN inspectors be given access to military sites to check whether they had been used for the possible development of a nuclear military program.

The P5+1 powers hope the deal will ensure that Iran would need at least a year -- compared with a few months in 2013 -- to produce enough enriched uranium material to make a bomb. Tight UN inspections would give ample notice of any such "breakout."

US Secretary of State John Kerry and his Iranian counterpart, Mohammad Javad Zarif, have met to try to resolve differences blocking a final nuclear deal. The talks come just weeks ahead of a deadline to seal a deal. (30.05.2015)

EU to resume nuclear talks with Iran ahead of June deadline

The EU said on Tuesday that it will resume talks with Iran to hammer out a deal on the country's nuclear program. Iranian Foreign Minister Javad Zarif says the final deal expected for June 30 is "moving forward." (05.05.2015)