US Secretary of State John Kerry and his Iranian counterpart, Mohammad Javad Zarif, have met to try to resolve differences blocking a final nuclear deal. The talks come just weeks ahead of a deadline to seal a deal. 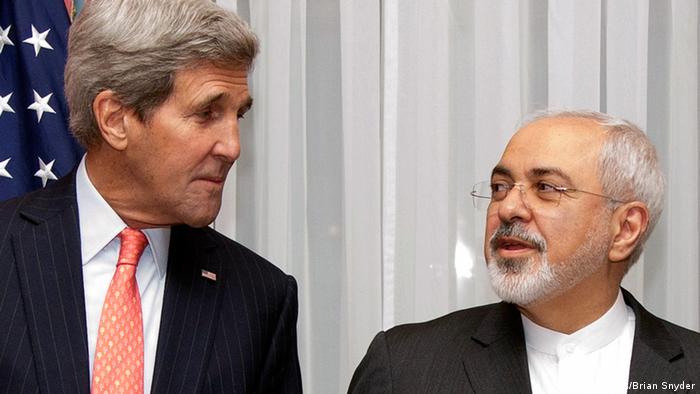 A number of issues remained unresolved as Kerry and Zarif sat down for talks in a Geneva hotel on Saturday.

One of the thorniest appeared to be how much - if any - access Tehran was prepared to give inspectors from the United Nations nuclear watchdog, the International Atomic Energy Agency, to its nuclear sites and scientists. A comment by Iran's chief nuclear negotiator suggested Tehran was not prepared to be flexible on the issue.

"Interviews with scientists are completely out of the question and so is inspection of military sites," senior Iranian negotiator Abbas Araghchi told Iranian state television earlier on Saturday.

However, the so-called P5+1 group of the United States, Great Britain, Russia, China, France and Germany, which agreed with Iran in Lausanne back in April on the framework of a deal to curb Tehran's program to prevent it from acquiring a nuclear weapon, have insisted that UN inspectors be given sufficient access. Iran has maintained its nuclear program serves only civilian purposes.

On Saturday, the Reuters news agency cited an unnamed Western diplomat that this continued to be the case.

"If the IAEA can't have access to [scientists] or the military sites then its a problem," the diplomat said. "The IAEA needs sufficient access quickly to those sites to ensure things don't just disappear."

Reuters also cited a US State Department official who said that if access wasn't granted, "we're not going to sign" an agreement.

As Kerry and Zarif went into their talks on Saturday, there was no indication that they were close to resolving the apparent stumbling block. When asked by a reporter whether they thought they could reach a final deal by the June 30 deadline, Kerry declined to comment, while Zarif replied: "We will try."

The final deal that the two sides are hoping to reach would see the United States, European Union and UN sanctions on Iran gradually lifted in return for it accepting the curbs on its nuclear program. Another one of the sticking points is how quickly this would happen, with Tehran demanding that this happen faster than what the P5+1 envisage.

The latest round of talks between the UN's nuclear watchdog agency and Iran over its nuclear program have failed to produce a breakthrough. There is no word on when the two sides would next meet. (16.04.2015)

IAEA chief arrives in Iran ahead of sanctions deadline 21.02.2021

UN nuclear watchdog head Rafael Grossi arrived late Saturday in Iran for talks on the eve of Tehran's deadline for US sanctions to be lifted.

The Russian military has said it wants "another way" to access Moldova's breakaway Trans-Dniester region. Meanwhile, the UN chief is set to travel to Moscow next week to meet Vladimir Putin. Follow DW for the latest.