UN′s Arms Trade Treaty ′too weak to make a difference′ | World| Breaking news and perspectives from around the globe | DW | 11.09.2017

UN's Arms Trade Treaty 'too weak to make a difference'

Over 100 states are meeting in Geneva to discuss why the three-year-old Arms Trade Treaty (ATT) has so far failed. Signatories are still sending arms to Saudi Arabia despite ethical commitments. 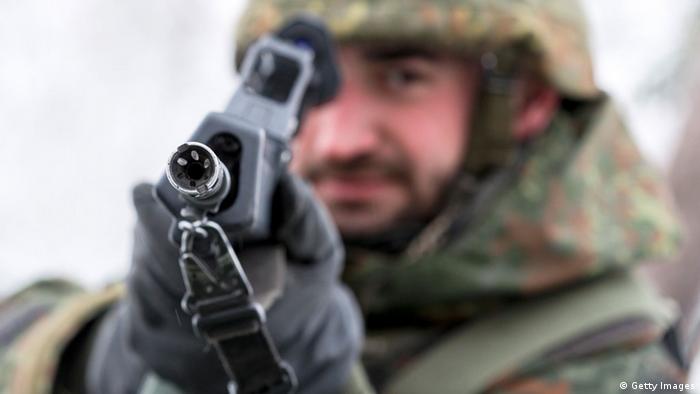 Diplomats from over 100 countries met in Geneva, Switzerland on Monday to discuss why the United Nations' landmark Arms Trade Treaty (ATT),which came into force three years ago, has so far failed to stop the flow of weapons to the world's war zones.

Celebrated as a paradigm shift in the regulation of the international arms trade, the ATT now looks like a disappointment, according to statements issued by NGOs instrumental in campaigning for it and then drawing it up.

"About half a million people are killed every year by firearms, and millions more are trapped in brutal conflicts fueled by reckless arms sales," James Lynch, Head of Arms Control and Human Rights at Amnesty International, said in a statement. "The Arms Trade Treaty promised to save countless lives by reigning in this massive, secretive industry, but at the moment weak implementation and a lack of transparency are threatening to undermine it."

The ATT is supposed to commit nations to stopping the export of conventional weapons if, as Amnesty puts it, "there is an overriding risk they could contribute to serious violations of international human rights or humanitarian law." 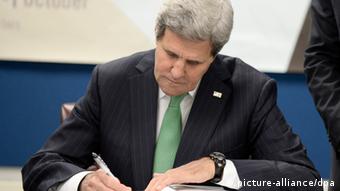 US Secretary of State John Kerry signed the ATT in 2013

A rule no one follows

Attending the third Conference of States Parties to the ATT was Amnesty's Rasha Abdul Rahim, who explained that diplomats there still considered the treaty "in its infancy."

"I tend to agree that it's too early to tell what the full impact of the treaty is," she told DW. "However, we are really concerned with the business-as-usual approach that we're seeing with some state parties. We're frustrated that we're not seeing as robust and transparent regulation of the arms trade as we would like."

Andrew Smith, spokesman for the Campaign Against Arms Trade (CAAT), said there had always been problems with the ATT. "We aren't aware of any arms exports that have actually been stopped by the ATT," he said. "It's evident that the treaty is too weak to make any meaningful difference."

But, as Amnesty's Rahim pointed out, "it's really difficult to tell" whether the ATT has had any effect, because "when states don't authorize an arms transfer, they don't usually give a reason for doing so."

Several countries including Germany, which ratified the ATT in 2014, have guidelines that the government is supposed to follow when it approves weapons exports, but they remain just that – guidelines, not laws.

CAAT were skeptical because the major arms exporting countries had been getting behind the ATT while maintaining, like Germany, that they already had robust arms export controls. The treaty was also being championed by arms companies - not exactly a sign that it was particularly tough.

"But there are also major shortcomings in the treaty itself," Smith of the CAAT said. "It's not entirely clear from reading it who would enforce the rules or how they would be enforced, or what would happen to anyone who broke them."

Mark Bromley, co-director of the arms control program at the Stockholm International Peace Research Institute (SIPRI), was more patient. "People are looking it at through the rubric of previous instruments such as the land mine treaty, which banned a whole class of weapons, and that was never something the ATT was ever going to do. It was always about a much softer process of trying to create standards about the way states regulate the arms trade." It's in such an area—persuading countries to be more transparent, for instance—that the ATT summit could make progress this week. 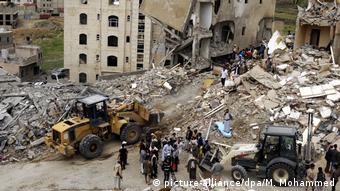 Yemen has been the subject of a relentless Saudi bombing campaign

The destruction of Yemen

The ATT has so far been signed by 130 countries, and ratified by 89, including some of the world's biggest arms exporters: the UK, France, and Germany. Other major arms exporters, including the US and Israel, have signed the agreement, but not yet ratified it, while Russia and China have done neither.

Amnesty listed several examples of countries signing the treaty and then ignoring it. For instance, France, the UK, and Italy, who all ratified the ATT in April 2014, have carried on sending all kinds of conventional weapons to Egypt while the government there continues to brutally crack down on dissent by killing and torturing thousands of protesters.

Perhaps the most egregious single example of an ATT signatory ignoring the treaty is the UK's recent $4.7-billion (3.9-billion-euro) arms deal with Saudi Arabia, a country that has been leading a relentless bombing campaign in the Yemen Civil War since 2015.

According to Sally Copley, Oxfam Britain's head of campaigns, Yemen is currently suffering "the world's worst humanitarian crisis," involving both a "borderline famine" and a massive cholera epidemic. "When you are witness to the suffering in Yemen it is hard to understand or excuse how the UK government talks the talk on arms control while it walks the walk of arms sales," Copley said in a statement. "On the one hand it fuels a war with massive arms sales while it sends aid to help the people it is harming."

SIPRI figures show exports to Saudi Arabia made up 48 percent of the UK's arms exports from 2012 to 2016, while in May this year the US agreed a $110 billion worth of potential arms sales to Saudi Arabia.

Those deals included $4.6 billion worth of guided air-to-ground munitions—a total of 104,000 bombs of the type that have been used in the Yemen war. Other deliveries in 2015-16 included 13,726 anti-tank missiles; 3,870 guided bombs; 60 combat helicopters and 1,279 armored vehicles and four fighter ground attack aircraft.

A report from the United Nations has found more than 5,000 people have died in Yemen in the past two-and-a-half years. The UN's human rights office is calling for an investigation of human rights violations. (05.09.2017)

Is the new UN arms treaty a boon for German industry?

Over Christmas, the UN treaty on arms trade (ATT) will enter into force, but the German arms industry explicitly welcomes the additional regulations. Industry leaders hope the treaty could spell access to new markets. (24.12.2014)

Global weapons treaty goes into force, but US yet to ratify

A treaty that seeks to regulate the global arms industry comes into force on Wednesday. Many major weapons producers have ratified the agreement - except the world's largest, the United States. (24.12.2014)