UN investigators are calling on world leaders to impose sanctions on companies linked to Myanmar's military. They say almost 60 foreign businesses, including firms from Europe, could be helping to fund rights abuses. 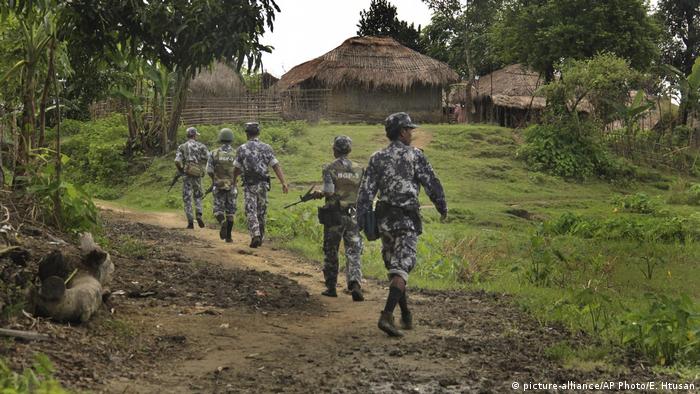 A UN fact-finding mission warned on Monday that a web of businesses run by Myanmar's army is financing military operations such as the crackdown on the country's Rohingya minority.

In a new report, the mission appealed for targeted sanctions on these companies, as well as an embargo on weapons sales to Myanmar.

"The revenues the military earns from domestic and foreign business deals substantially enhances its ability to carry out gross violations of human rights with impunity," the mission said.

The report identified at least 59 foreign companies — including firms from France, Belgium, Switzerland, Hong Kong and China — that have dealings with army-linked ventures. It also named at least 14 companies that have sold arms to the Myanmar military, including state-owned entities in Israel, India, South Korea, and China.

The UN and Western governments accuse Myanmar's military of committing mass killings, gang-rapes, arson and other atrocities during the 2017 military crackdown in Rakhine state. The violence forced more than 700,000 members of the Rohingya Muslim minority fleeing over the border to Bangladesh.

Myanmar's government denies the allegations and says it was reacting to attacks by Rohingya insurgents.

Read more: Myanmar's democracy is letting down a young generation

The UN panel has previously said the military leaders in charge of the two conglomerates should be investigated for genocide and war crimes.

Myanmar has one of the fastest-growing economies in the region and its transition from military to civilian rule over the past decade has attracted foreign businesses. However, investors have come under pressure to ensure they are not indirectly aiding human rights abuses.

Marzuki Darusman, the chair of the UN fact-finding mission, stressed that the international community needed to do more to curb the military's funding, for example through sanctions and by encouraging foreign companies to do business with entities independent of the army.

"This will foster the continued liberalization and growth of Myanmar's economy, including its natural resource sector, but in a manner that contributes to accountability, equity and transparency for its population," he said.

The US, the EU, Australia, and Canada have imposed sanctions on senior officers in Myanmar over the killings in Rakhine state. The International Criminal Court has also launched a preliminary probe into rights abuses.

Mobile internet has been shut down in parts of conflict-torn western Myanmar under a government decree. A UN investigator warns the army could be using the blackout as a cover for "gross human rights violations." (25.06.2019)

Under a land reformation act, millions of farmers across Myanmar could be forced from land they have tilled for generations. Many are unaware of the danger they face. Peter Yeung and Carlotta Dotto report from Yangon. (01.03.2019)