Myanmar land ownership law could displace millions of farmers | Asia | An in-depth look at news from across the continent | DW | 01.03.2019

Under a land reformation act, millions of farmers across Myanmar could be forced from land they have tilled for generations. Many are unaware of the danger they face. Peter Yeung and Carlotta Dotto report from Yangon. It took less than a day for Daw Oo Naing's entire banana plantation to be destroyed. A group of 21 men carrying long knives arrived quietly in the morning and made quick work of hacking down her 600 trees, which were still young with tender trunks.

Oo Naing said she tried to drive them away; using a slingshot to defend her ancestral land. "I will protect my plantation with my life," she said. "It will be the legacy of my children." But her effort was futile. Her livelihood was demolished.

Under Myanmar's  Vacant, Fallow and Virgin Lands Management Act (VFV), introduced in 2012 as part of a slew of measures to bring in large-scale investment and development to rural areas, Oo Naing's land ownership was not legally binding.

Although Oo Naing's family had reared the land for generations, their ownership was not officially documented. This is a common situation among Myanmar's 134 ethnic minorities, who constitute a third of the country' population of 51 million. Their land was considered vacant by the authorities. In effect, anyone could claim it.

For example, Chinese businesses have taken over banana plantations for mass-export in Kachin. And in Rakhine state land has been taken over to build oil and gas pipelines.

Because the customary land rights of ethnic tribes in Myanmar have not been recognized under the VFV law, it means that the farmers don't officially own the land, and businesses have literally been taking it by force. 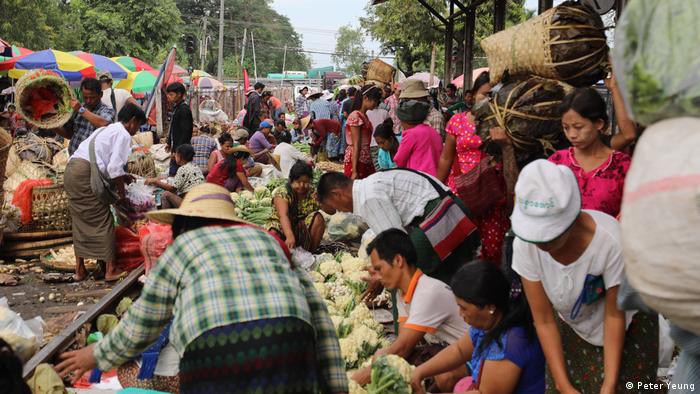 Farm goods for sale at a market in Yangon, Myanmar

In September 2018, the problem was supposed to have been addressed by an amendment to the VFV law. It stated that customary land ownership by rural, ethnic minorities was to be recognized.

The amendment set a deadline of March 11, 2019 to apply for permission to use the land. If this is not done, land could be confiscated from millions of people who would then risk prosecution and imprisonment for "trespassing" on their own property. The problem is, many rural farmers are unaware of the amendment and have not been informed that they need to apply for ownership.

Furthermore, the permits would only have a 30-year validity, and owners would have no guarantee of keeping their land afterwards.

Fifty million acres of land in Myanmar, a third of the entire country, is classified under VFV. The public interest group Public Legal Aid Network said its team of paralegals is urgently trying to inform rural communities about applying for land ownership under the amendment. An estimated 82 percent of VFV land is in states populated by ethnic minorities. An paralegal advisor speaks with a farmer in Myanmar

Although the 2018 amendment recognizes customary land rights, farmers who currently live and work on land classified under the VFV law remain at risk. The very short deadline and lack of information for those it will affect have turned the situation into an emergency.

NGOs say this six-month deadline shows that the government just wants to clear up land to facilitate business, rather than reforms being any attempt to clarify or improve land rights.

"It will create a lot of land insecurity because there will be pressure on areas that have commercial value," said Celine Allaverdian of the French land research NGO, GRET.

Rural farming communities in Myanmar are living under the constant threat of losing their land and livelihoods.

Myanmar's farmers have suffered devastating arbitrary land seizures and forced evictions by the government, military, and private companies since army-backed socialism gave way to privatization in 1988.

The total amount of land illegally confiscated in recent decades is unknown, but in 2016, the government's farmers' affairs committee put the figure at 2 million acres (809,000 hectares).

"Land seizure is the country's biggest challenge," he said. "People have not been systematically informed that they must register their land. This is a ticking time bomb."

Others say the 2018 VFV amendment is in conflict with existing policy and offers less protection for ethnic groups. "It contradicts key elements of the 2016 National Land Use policy, such as provisions on restitution and land use rights of ethnic nationalities," said Jose Arraiza, a Myanmar legal adviser for the Norwegian Refugee Council.

"Land grabbing has had a profoundly debilitating effect on rural communities," said Ben Hardman, a Myanmar legal director at Earth Rights International. "Even now, laws are widely ignored and when they are enforced it is to benefit powerful elites and military-linked companies." 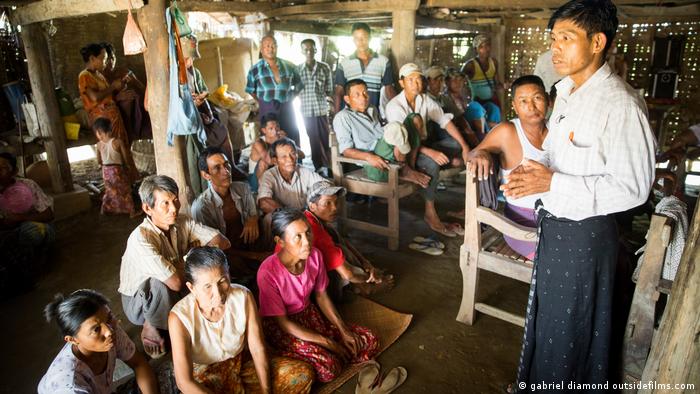 A community meeting with a paralegal advisor in Myanmar

Disputes over land remain a key challenge for Myanmar in attracting investment from abroad, particularly amid international condemnation over the Rohingya crisis.

There are also fears the policy will undermine already precarious ceasefire agreements with militias. For example, the armed ethnic group Karen National Union has called for the law's abolition, warning it will damage the peace process.

In an open letter in response to the law, a national grassroots coalition, including influential bodies such as the Myanmar Alliance for Transparency and Accountability and Land in Our Hands, called for the government to "abolish" the law and instead "enact a federal law that safeguards people's integrity, their lives and livelihoods."

The Myanmar Department of Agriculture did not respond to repeated requests for comment.

More than 700,000 Rohingya refugees are currently struggling with day-to-day survival at camps on the Bangladesh-Myanmar border. Their much-discussed repatriation is not possible at the moment, but what will 2019 bring? (29.12.2018)