The US-sponsored resolution only got two "yes" votes at the UN Security Council, falling far short of the nine it needed to be adopted. China and Russia rejected the proposal, while Germany abstained. 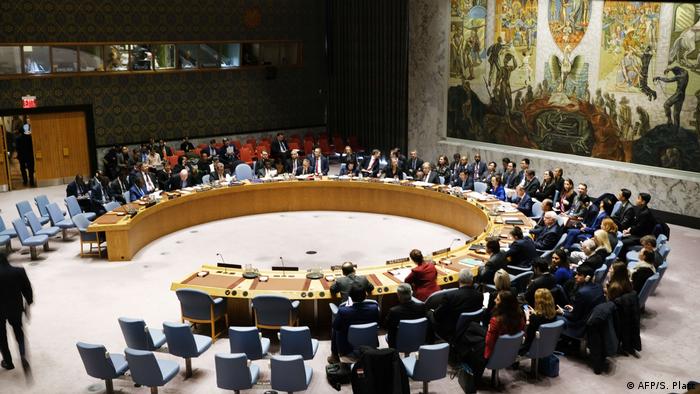 The UN Security Council on Friday rejected the United States' calls for an indefinite extension to the arms embargo on Iran.

Shortly after the result of the council's vote was announced, China's UN Ambassador Zhang Jun said the outcome "once again shows that unilateralism receives no support, and bullying will fail."

US Secretary of State Mike Pompeo criticized the rebuff, saying in a statement, "The Security Council's failure to act decisively in defense of international peace and security is inexcusable." In a tweet, Pompeo accused the UN of enabling Iran's arms deals.

Speaking later from Warsaw at the end of a four-nation tour of central and eastern Europe, Pompeo added it was "unfortunate" that France and the UK — both permanent members of the Security Council — did not support the US position.

"The United States simply wanted the keep the same rules that have been in place since 2007," he told a news conference. "I think there are a lot of people who understand that it is not in the world's best interest to allow this arms embargo to expire. I hope they find the courage to say so publicly."

Tehran welcomed the vote, saying it had left the US isolated internationally. Foreign ministry spokesman Abbas Mousavi tweeted a warning that the US should "stop shaming itself" otherwise "it will get isolated, even more than now."

The US-sponsored resolution was opposed by China and Russia. Eleven members abstained, including Germany, France and Britain, while the US and the Dominican Republic were the only members to back the proposal. To get approval, the resolution needed nine "yes" votes.

The embargo on Iran is set to end in October this year, under a provision of UN Resolution 2231, in which the Security Council backed the nuclear deal between Tehran and a group of world powers.

The five permanent members of the Security Council — the US, the United Kingdom, Russia, France, and China — all endorsed the agreement in Vienna in 2015. Germany and the European Union also signed the landmark deal.

Israel to work with the US

Israeli Prime Minister Benjamin Netanyahu called the UN vote "scandalous" and claimed the Security Council was encouraging weapons sales instead of opposing it.

Netanyahu reiterated his government's stance that "Iranian terrorism and aggression" threaten peace in the Middle East and the rest of the world.

The Israeli leader vowed to continue cooperation with the US, which said it would not allow the arms embargo provision to expire on October 18.

"The extremist regime in Iran doesn't just finance terrorism: it takes an active part in terrorism through its branches around the world and uses it as a political tool. This behavior represents a danger to regional and international stability," said Ashkenazi.

The UN remains split on the way to deliver aid to Syria, with Beijing and Moscow vetoing the latest humanitarian push. The nations disagree on which border crossings should be used and for how long.

After a one-week deadlock between Western countries and Russia and China, the UN Security Council voted to restart cross-border humanitarian aid to Syria, but with only a single access point into the war-torn country.

After a US-Russia deadlock, the UN Security Council has agreed to extend a cross-border transfer of aid from Turkey to rebel-held areas of Syria — but only for six months, as demanded by Moscow.