After a one-week deadlock between Western countries and Russia and China, the UN Security Council voted to restart cross-border humanitarian aid to Syria, but with only a single access point into the war-torn country. 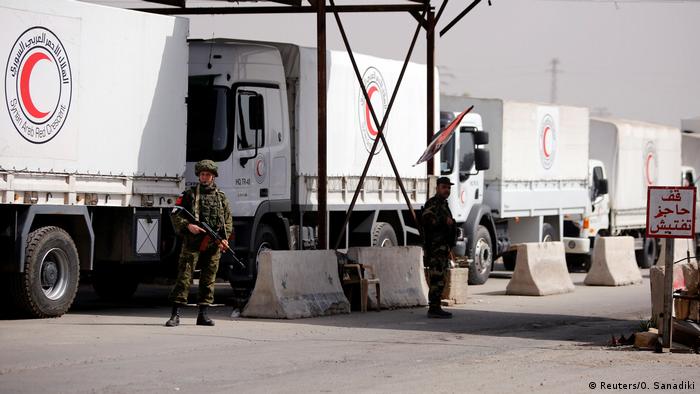 The UN Security Council (UNSC) passed a resolution on Saturday authorizing humanitarian aid deliveries to Syria's mainly rebel-held northwest from Turkey through just one crossing point, a day after its authorization for the six-year-long humanitarian operation ended, leaving millions of Syrian civilians in limbo.

Following a week of division and seven ballots, the Council passed a text submitted by Germany and Belgium allowing the use of the Bab al-Hawa crossing point for one year. The measure passed with 12 of 15 votes, with Russia, China and the Dominican Republic abstaining, diplomats said.

The vote is seen as a victory for Russia, the Syrian government's most important ally. Moscow argued that aid should be delivered from within Syria across conflict lines and just one crossing point is needed.

The UN and humanitarian groups, along with the vast majority of the Security Council, had supported a plan to renew two crossing points along the Turkish border that channel essential aid to the 2.8 million needy people in the region of Idlib, an area the Syrian regime does not control. But Russia and China — both permanent members of the UNSC — vetoed the measure.

Germany and Belgium, which sponsored the widely supported resolutions for two crossing points, were forced to back down by the threat of another Russian veto, and their latest draft authorized only the single crossing point from Turkey for a year.

In a joint statement after the vote, Germany and Belgium said: "One border crossing is not enough, but no border crossings would have left the fate of an entire region in question."

Acting British UN Ambassador Jonathan Allen said after the vote that the loss of aid access through Bab al-Salaam border crossing would deprive "1.3 million people in northwest Syria of cross-border humanitarian assistance that they rely on."

When the UNSC first authorized the cross-border aid operation into Syria in 2014, it also included access from Jordan and Iraq. Those crossings were cut in January due to opposition by Russia and China.

"Russia is consistently in favor of humanitarian deliveries to Syria with full respect of the country's sovereignty and territorial integrity and with coordination of its legal government. This issue should not be politicized," deputy Russian UN envoy Dmitry Polyanskiy said after the vote.

Ahead of the vote, Physicians for Human Rights' Policy Director Susannah Sirkin condemned Russia and China's ''cynical and cruel maneuvering'' to cut off life-saving aid using their veto power. Their quest to close one critical border crossing ''is one more tragic example of the broken U.N. humanitarian system, and a defamation of its Charter,'' Sirkin said.

Since the outbreak of the Syria conflict in March 2011, it's estimated that at least 500,000 people have been killed. Supporters of Syrian President Bashar Assad now again control around two thirds of the nation's territory. In addition to the serious political and economic crisis in the country, there is currently the danger of the coronavirus pandemic. In Idlib, the local health authorities have just released evidence of a first registered coronavirus case.

Russia wanted to reduce the number of border crossings for aid to be brought into war-torn Syria. Its proposal only got four votes. Germany's Foreign Minister Maas slammed Russia for making the humanitarian crisis worse. (09.07.2020)

Sexualized violence in Syria's prisons is brutal and widespread. Why do its perpetrators appear to act with impunity? Legal activists are seeking justice in Germany for thousands of victims. (19.06.2020)