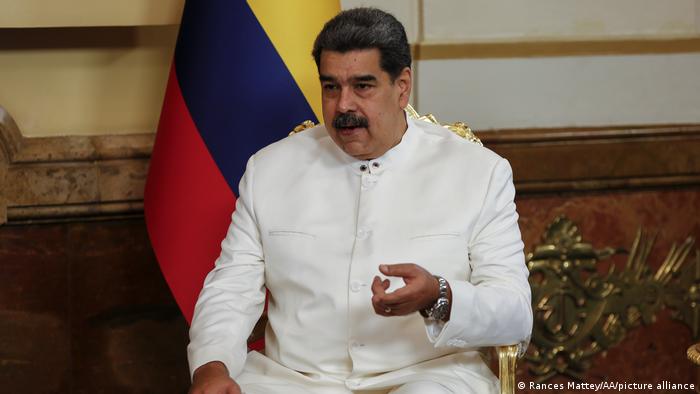 A United Nations (UN) report presented Tuesday claims that Venezuelan security services under the direction of President Nicolas Maduro have committed crimes against humanity in an effort to quash political opposition in the beleaguered Latin American country.

Complied by the UN's Independent International Fact-Finding Mission on the Bolivarian Republic of Venezuela, the report outlines the extensive use of arbitrary arrest and torture in Venezuela since 2014.

Findings were based on interviews with 471 victims, their families and their legal representatives, as well as another 50 individuals who worked for Venezuela's General Office of Military Counterintelligence (DGCIM), National Intelligence Service (SEBIN), and other government entities.

"Real or perceived government opponents and their relatives were subjected to unlawful detention, followed by acts of torture," read the report, which then went on to list various types of torture, noting that victims were beaten with blunt and sharp objects, given electric shocks, and force-fed feces and vomit, as well as suffering sexual violence at the hands of security services.

"The Venezuelan authorities have failed to hold perpetrators to account and provide reparations to victims in a context where judicial reforms announced from 2021 have failed to address the justice system's lack of independence and impartiality," the UN mission said.

The report says Maduro and United Socialist Party of Venezuela (PSUV) leader Diosdado Cabello regularly give orders to intelligence services to target specific individuals — often opposition, student and protest leaders, journalists and people working for NGOs. These people are often surveilled, investigated and then subjected to "cruel, inhuman or degrading treatment or punishment," sometimes for days or weeks on end.

Beyond terrorizing political opponents, lawlessness and abuse in rural regions of the country were also investigated.

Mission researchers found that the area known as the Arco Minero del Orinoco, established as a gold mining center in southern Venezuela last decade when oil sales plummeted, was rife with abuse.

"The Mission has reviewed publicly available information indicating that members of the Venezuelan military and political elite have benefited and continue to benefit financially from gold mining-related activities in the Arco Minero," said the report.

The region, which has become heavily militarized, gives those with ties to power in Caracas the opportunity to build immense personal wealth in a region plagued by illegal mining and where indigenous populations are regularly attacked.

Tuesday's report was the third published on Venezuela to date. The mission is scheduled to share its findings with the UN Human Rights Council (UNHRC) in the coming weeks.

In its first report two years ago, the mission accused Maduro and his government of committing crimes against humanity. In its latest report, the mission investigated chain of command structures and the role of intelligence services in repressing political opposition in the country.

Displaced: Oil and Ruin - The Exodus of Venezuela