The Hague-based court is moving to formally investigate human rights abuses in Venezuela after a three-year preliminary probe. Caracas has said it respects the decision but doesn't agree. 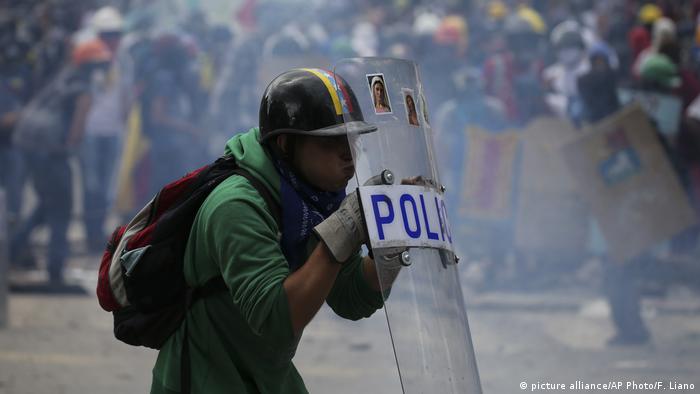 The International Criminal Court (ICC) said on Wednesday it was opening a formal investigation into allegations of human rights violations in Venezuela.

The Venezuelan government has said it accepts the decision but that it does not share the opinion that the investigation should go ahead.

The decision, which comes at the end of preliminary examination, was enshrined in a joint memorandum signed by ICC prosecutor Karim Khan and Venezuelan President Nicolas Maduro.

Khan had been in Venezuela for a three-day visit to determine whether the proceedings, started in 2018, should move forward to the investigation.

The court, based in the Dutch city of The Hague, will investigate whether crimes against humanity were committed during Venezuela's clampdown on anti-government protests in 2017.

"The ICC prosecutor has concluded his preliminary examination of the situation in Venezuela and has determined that it is appropriate to open an investigation to establish the truth in accordance with the Rome Statute," a memorandum signed by the Venezuelan government reads.

The Rome Statute, which established the ICC in 1998, outlines the functions and jurisdiction of the court when it comes to where it can take action.

What the Venezuelan president said

While Maduro said he did not agree with Khan's evaluation, he said Venezuela respected it.

"We respect his decision as a state, though we have made clear we do not share it," said Maduro. "We have signed an agreement that does guarantee, in an effective way, cooperation, positive complementarity, mutual support, constructive dialogue to seek truth and justice."

Khan also signed an agreement with Maduro's government to allow national authorities to advance in their own efforts at establishing accountability, as outlined by the Rome Statute.

Venezuela "considers that the allegations should be investigated in the country by existing national institutions created for this purpose," the memorandum explains.

The ICC can only investigate and prosecute international crimes in situations where states are "unable" or "unwilling" to do so themselves.

What the ICC prosecutor said

Standing alongside Maduro, Kahn said he was aware of the political "fault lines" and "geopolitical divisions" around Venezuela, but vowed not to tolerate any interference in the investigation.

"I'm fully aware of the flaws that exist in Venezuela, the political division. We (the ICC) are not political, we are guided by the principles of legality and the rule of law," said Khan.

"I ask everyone, as we enter this new phase, to give my office space to do its work."

When the ICC opened the preliminary investigation in 2018, Khan's predecessor Fatou Bensouda said there was a "reasonable basis" to believe the government had committed crimes against humanity.

The probe was opened at that time after Peru, Paraguay, Chile, Argentina, Colombia and Canada took the unprecedented step of asking the tribunal in The Hague to investigate a fellow member country.

The nations called upon the ICC to investigate alleged torture, rape, murder, violations of due process, and crimes against humanity perpetrated by Maduro's government since February 2014.

Venezuela's government last month halted talks with the US-backed opposition in protest at one of Maduro's allies, who had been involved in negotiations, being extradited to Florida.