The Maduro government has asked for the lifting of international sanctions, while the opposition wants free and fair elections. Both sides believe they speak for the Venezuelan people. 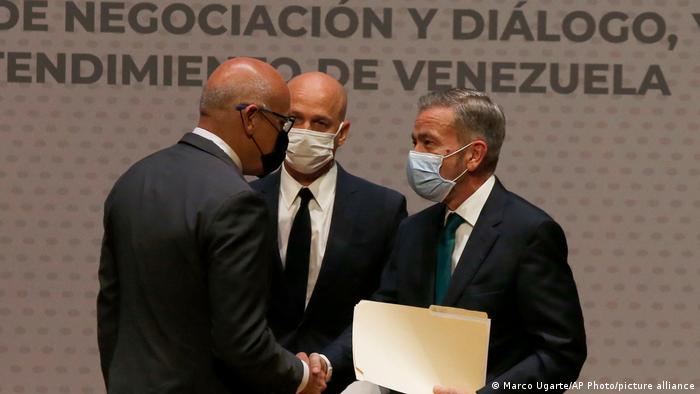 Delegations from the Venezuelan government and opposition continued talks in Mexico City on Saturday, with the two sides finding some common ground out of the country's ongoing political crisis.

"We have been working mainly on partial agreements, especially those related to serving the people of Venezuela," parliament speaker Jorge Rodriguez, who led the government delegation, said on Saturday.

What do the two sides want?

Venezuelan President Nicolas Maduro has called for the lifting of international sanctions and demanded the opposition recognize the authority of the government.

The opposition, on the other hand, has pushed for free and fair elections.

"Our aim is to reach an agreement that resolves the conflict through a free and fair presidential and parliamentary election, with guarantees," Guaido said in a video published on social media.

The government is "very attentive" to all the economic guarantees that have been "wrested, blocked, stolen, withdrawn from the people of Venezuela", added Rodriguez.

Opposition delegation leader in Mexico, Gerardo Blyde, said, "It is a process which is beginning, which is hard, complex." He said the goal was "to alleviate the crisis" caused by "very serious basic problems."

The talks are being hosted by the Mexican government under President Andres Manuel Lopez Obrador and mediated by Norway. Obrador has previously expressed support for Maduro.

The current round of talks is slated to conclude on Monday.

The negotiations in Mexico kicked off last month, with the government and opposition delegations signing a memorandum of understanding during an opening ceremony.

Concessions made to facilitate negotiations

Both sides have recently granted concessions as part of the negotiating process.

The government released opposition leader Freddy Guevara from prison last month, while the opposition promised this week to take part in upcoming regional elections. The move to participate in elections is a reversal of a three-year boycott by the opposition and bolsters Maduro's political legitimacy.

Tensions escalated in January 2019 following a contested presidential election between Maduro and Guaido, with both figures claiming to be the country's legitimate leader.

Maduro's claim to the presidency was backed by countries such as Russia, China, and Turkey, while support for Guaido came from Western powers such as the US, the UK and the EU.

Previous negotiations between the two sides in Barbados in 2019 and the Dominican Republic in 2018 failed to break the country's political impasse.

Venezuela has teetered on the brink of economic collapse since 2013, with the country witnessing hyperinflation and shortages of food and other necessities.

The Latin American nation has also struggled to cope with the ongoing coronavirus pandemic, as doctors and healthcare workers have left Venezuela en masse in recent years.