The UN human rights organ said Nicaragua lacked the conditions for freedoms of speech and assembly, placing the blame squarely on President Daniel Ortega's government. Ortega blasted the report as baseless and slanted. 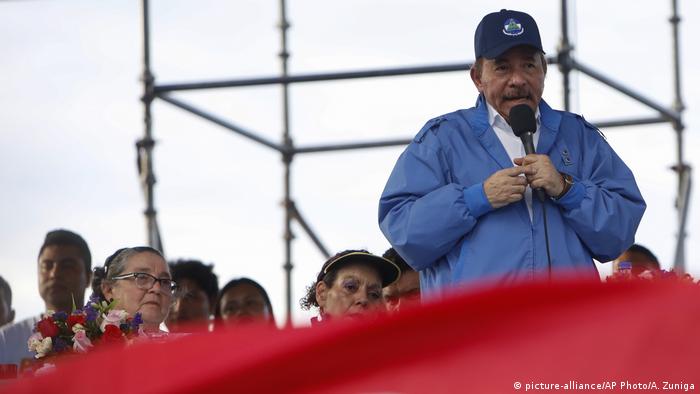 The UN High Commissioner for Human Rights released a report on Wednesday on the political crisis in Nicaragua, where it detailed government-led repression efforts from street level all the way up to the justice system.

According to the document, more than 300 people have been killed since anti-government protests in the beleaguered Central American nation began in April.

In carrying out its investigation, the UN team said it faced hurdles imposed by the Nicaraguan government. Team members were not given access to relevant government agencies or allowed to be present at court hearings of people accused by the government of crimes, ranging from organized crime to terrorism for participating in the protests.

The team was also forbidden to travel outside the capital city of Managua by the foreign ministry for alleged security reasons.

Still, the UN report was able to ascertain that illegal arrests, torture and closed trials had taken place. It said that doctors, professors and judges who have spoken out or protested against the government have been dismissed from their jobs as punishment or to dissuade participation.

"The level of persecution is such that many of those who have participated in the protests, defended the rights of the protesters, or simply expressed dissenting opinion, have been forced to hide, have left Nicaragua or are trying to do so," the UN said.

Zeid Ra'ad al-Hussein, the UN High Commissioner for Human Rights, told reporters that "repression and retaliation against demonstrators continue in Nicaragua as the world looks away."

The UN called on President Ortega's government to immediately halt the persecution of protesters and disarm the masked civilians who have been responsible for many of the killings and arbitrary detentions.

Nicaragua's government dismissed the report as baseless and said that it relied on anti-government media accounts.

It also denied the excessive use of force against protesters and accused the UN of overstepping its authority, as well as violating Nicaragua's sovereignty.

"The report is biased and slanted with subjective assertions," the government said, noting that the UN had not included any mention of an attempted coup d'état that Ortega alleges he has been a target of.

The government added that the UN had not been invited to the country to assess its human rights situation, but to help the verification commission established as part of the national dialogue.

At a rally with his supporters, Ortega went further and insisted the UN did not care for his side in the crisis. "If the tortured person was a Sandinista, he doesn't exist for the UN human rights commission ... for them, the killer coup plotters were little angels," he said.

Ortega has blamed international agents and internal enemies of causing the current crisis and has vowed to not step down before the end of his term in 2021.

The German PEN Center has awarded the ex-Sandinista revolutionary the 2018 Hermann Kesten Prize for defending freedom of speech. One of Latin America's most important writers, Belli is a critic of the Ortega government. (08.08.2018)