Will Nicaragua be the next Venezuela? | Americas | North and South American news impacting on Europe | DW | 25.06.2018

Protests in Nicaragua have left as many dead in just two months as the Venezuelan crisis did over the course of several years. Even with the opposition in talks with the government, experts say anything can happen.

Two months after an uprising took hold of Nicaragua, there appears to be no end in sight. It began on April 18, with citizens protesting President Daniel Ortega's controversial pension system reform. Ortega withdrew the proposal four days later, hoping the protests would end. Instead, demonstrators continued to rally, but this time against the repressive methods of the state and the deaths it produced, throwing the country into unexpected political chaos.

The magnitude of Nicaragua's anti-government protests and the brutality with which they have been repressed are reminiscent of the Venezuelan political crisis of the past several years.

Some 40 people died in Venezuela's protests of 2014; the unrest that faced President Nicolas Maduro last year left another 150 dead. But in just two months of civil disobedience in Nicaragua, the death toll is estimated to have reached 200 people, although the government only recognizes 46 deaths.

The UN High Commissioner for Human Rights, Zeid Ra'ad al Hussein, has joined the chorus of outrage against the Ortega regime's tactics, saying that he condemned the killing that has gone on for two weeks "at the hands of police or pro-government forces."

But the violence has not abated. On June 16, in one of the worst cases so far reported, an entire family of six burned to death when a group of men set their home on fire. Prior to that, the most shocking case had been that of 15 people who were shot to death during a large, peaceful demonstration on May 30.

Kidnappings and torture are among the accusations of crimes against humanity leveled at the Ortega regime. Pro-government mobs and security forces have reportedly wounded thousands of people. 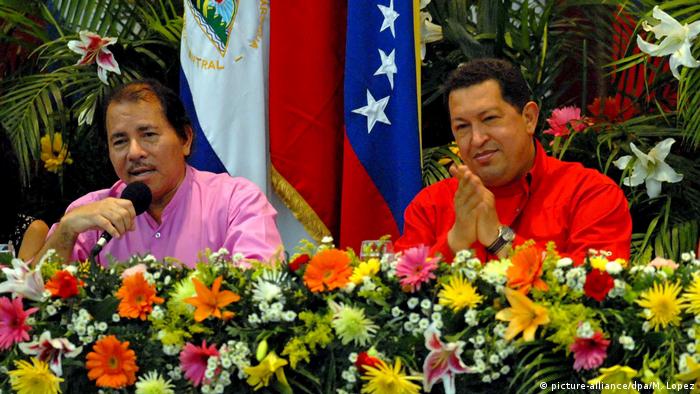 Nicaragua's Catholic Church and a number of other institutions have called for the Sandinista leader and his wife, Vice President Rosario Murillo, to step down.

Rumors abound. In an interview with Nicaraguan media, writer and former Vice President Sergio Ramirez alleged that Ortega had held several meetings with representatives of US Senate, with the approval of the US Department of State, and agreed to early elections on March 2019. Is it at all likely?

"Anything is possible," said Sebastian Huhn, a political scientist at Germany's Osnabrück University. "Ortega is under a lot of pressure and agreeing to early elections may be his only chance to avoid ending up in a national or international tribunal," he said.

Yet, the embattled Nicaraguan president has still not outwardly made any effort to resolve the crisis.

"Ortega is not interested in national reconciliation. There is no doubt that the violence is coming from the state. The police and the Sandinista mobs follow his direct orders. He could stop the killing and he has not done it," Huhn said.

Sabine Kurtenbach, acting director of the GIGA Institute of Latin American Studies in Hamburg, echoed Huhn's views, and said she believes there are only three plausible scenarios left for Nicaragua.

In the best case, various political forces in the country could come to an agreement to restore the constitutional order. But she admits she "can't imagine Ortega signing on to something like that," as the regime has already been willing to lose two important allies – the business community and the church.

The worst case sees further deterioration. Although the strength of the opposition lies in its commitment to peaceful protests, "the rise of groups willing to take up arms against the state cannot be ruled out." In such a scenario, the role of the armed forces, which have so far stayed out, may become relevant again.

And the third scenario? "Of course there is also the possibility that early elections are indeed called," Kurtenbach said.

For now, Ortega is refusing to loosen his grip on power. But unlike Venezuelan President Nicolas Maduro, who has severed ties with the Inter-American Commission for Human Rights (IACHR), the Nicaraguan president is still open to allowing the regional body to investigate the claims made against him.

The peace dialogue brokered by Nicaragua's clergy between the government and the opposition is still centered on whether or not the IACHR and observers from the UN and the EU will be allowed to enter the country.

"The international organizations are what the country needs most at this moment because local institutions cannot do the job," said Kurtenbach.

Representatives of the IACHR have announced plans to travel to Managua on June 25, though it is uncertain whether they'll be permitted entry.

A shooting and a fire in the capital city, Managua, have left eight people dead. The deaths come hours after President Daniel Ortega and protesters agreed to a ceasefire after two months of violence and political unrest. (17.06.2018)

The crisis in Nicaragua explained

Continued protests have thrown the Central American nation into political disorder. DW looks at the key events that led to the chaos. (20.06.2018)