A US citizen is among those killed in the latest surge of violence between government supporters and opposition groups. The violence in Nicaragua has left more than 100 people dead and many more injured. 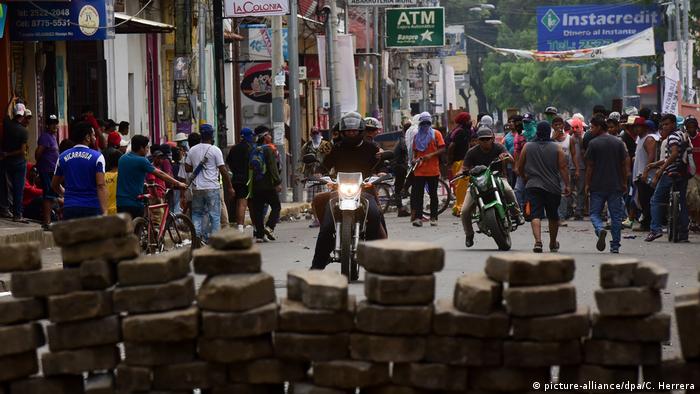 At least six people, including one American, were killed in the latest wave of unrest in Nicaragua on Saturday.

The body of Sixto Henry Vera was found lying beside two burned vehicles with a bullet wound to the head, medical authorities said.

Employees at the Managua bar owned by Vera said he had left late on Friday to help a friend who was being attacked.

US Ambassador to Nicaragua Laura Dogu confirmed Vera was a US citizen and expressed her condolences on Twitter.

"The US government expresses its condolences to the family of the US citizen killed last night and to all the families who have recently visited the Forensic Medicine Institute," she tweeted. "The death of a US citizen is of great concern to our embassy."

More than 100 people have been killed in the country since mid-April in clashes between President Daniel Ortega's supporters and opposition groups demanding his dismissal.

On Wednesday, more than a dozen people died and at least 200 were injured in shootings that erupted amid protests on Mothers' Day in Nicaragua.

Civil society groups say the Wednesday attacks were carried out by members of paramilitary groups loyal to Ortega, while government officials blamed the opposition groups who want Ortega removed.

The increasing number of criminal gangs has caused residents in several cities to organize neighborhood watch groups with barricades.

The Red Cross reported two people manning barricades in the city of Masaya were fatally shot on Saturday.

The call by UN human rights officials came after the death toll in anti-government protests rose by three more students. Some 47 people have been killed while demanding justice from Nicaraguan President Daniel Ortega. (11.05.2018)

A Nicaraguan human rights body says more than 20 people have been killed in days of anti-government protests. Among the dead is a journalist shot while livestreaming from the demonstrations. (22.04.2018)