A shooting and a fire in the capital city, Managua, have left eight people dead. The deaths come hours after President Daniel Ortega and protesters agreed to a ceasefire after two months of violence and political unrest. 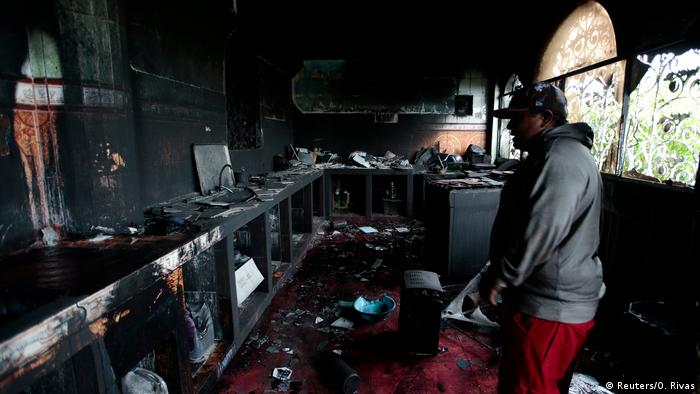 At least eight people were killed in separate incidents of violence in Managua on Saturday morning, just hours after President Daniel Ortega and anti-government protesters struck a truce aimed at ending months of unrest.

Six people belonging to one family, including two children, died when masked men threw Molotov cocktails into a three-story house, setting it ablaze. A survivor told a local news station that suspected paramilitary officers loyal to Ortega had wanted to use the house as a sniper's perch.

Nicaraguan Fire Chief Ramon Landero said in a statement that the masked men had also attacked firefighters as they attempted to put out the blaze.

Jose Maria Hernandez, 63, uncle of the building's owner, said his nephew and nephew's wife died in the blaze that had resulted from a confrontation with police.

"This is a massacre. A barbarity. These police surrounded the house and burned it after my nephew refused to let them put snipers on the roof," Hernandez told Reuters news agency outside the building, which had spewed thick black clouds of smoke.

The other two victims were attacked while clearing makeshift road barricades near a university campus, police said in a statement.

Local media reported that police and pro-Ortega masked gunmen had fired at protesters guarding the roadblocks.

Government officials blamed "delinquents" for the Saturday's killings, while civil groups blamed police and other government employees for the two attacks.

More than 170 people have died since anti-government protests began in April after Ortega decided to slash pension benefits to cover a widening social security gap.

The protests soon turned fatal and demonstrators began demanding Ortega's resignation, despite the government rolling back the cuts.

The two sides agreed to a ceasefire on Friday after peace talks brokered by the Roman Catholic Church. The government has accepted the protesters' demand to allow for a foreign inquiry into the country's bloodiest confrontations since a civil war ended in 1990.

Despite the violence on Saturday, representatives from civil society groups and the government met for the second day of negotiations.

The two sides agreed to form three working groups that will meet again on Monday to address security concerns, election matters and a potential reform of the Supreme Court.

"We were going to sleep in peace and tranquility. And what's sad was waking up to the death of this family, how they were burned," Michael Healy, president of the agriculture producers union, said at the conclusion of talks.

"The government wants us leave this table, and we're not going to let that happen... it's the only way to put an end to this," he added.

Nicaraguans have been taking to the streets for weeks in protest against President Daniel Ortega. Students are leading the charge to reform a government they say has turned into a "dictatorial regime." (13.06.2018)