A prison where Nicaraguan President Daniel Ortega was once jailed by the country's right-wing dictatorship now holds his own dissidents. DW spoke with family members and activists camping outside El Chipote jail. 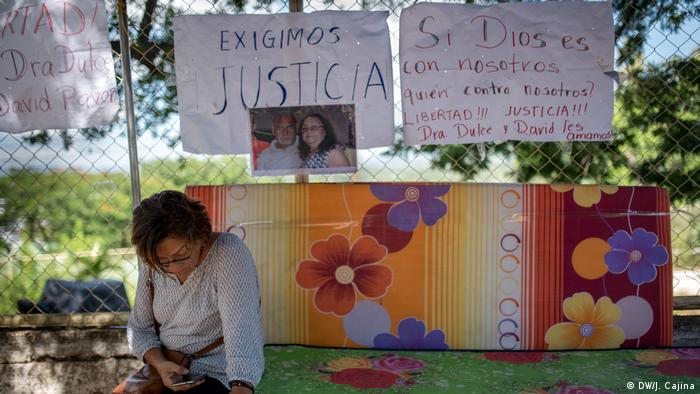 Violence has gripped Nicaragua since April 18, when citizens took to the streets to reject a pension proposal by President Daniel Ortega. Though the plan was withdrawn, protesters continued to rally against government repression and have demanded Ortega's resignation. Since then, the Inter-American Human Rights Commission has confirmed that 264 people have died and 1,800 more have been wounded during the government crackdown.

An untold number of people have been detained in prisons like El Chipote, in the capital city of Managua, for protesting against Ortega's government. Most of them are young males, forcefully pulled from their homes by masked and heavily armed pro-government paramilitaries. All of them are robbed of their money and cellphones, beaten and then carried away in unregistered vehicles.

Tears, frustration and a sense of hopelessness hang heavy outside of El Chipote, where family members have gathered in search for their loved ones.

Yuri Gabriela Gonzalez, a 31-year-old housewife, had been outside El Chipote for two days demanding that authorities release her underage son. He was taken from his home in the community of Diriamba, south of Managua, along with two of his friends. Four other members of the family were also illegally detained when pro-government forces stormed the town.

Gonzalez, clutching a photo of her son, told DW that she had asked the authorities to take her into custody instead. "I want my son alive and I will not leave until they give him back to me," she said.

But at El Chipote no one is listening. Two police officers stood idly by and did not even turn their gaze at a judge who had arrived with an official order of release.

It was Ortega and other commanders of the Nicaraguan revolution who gave El Chipote its name, in honor of the namesake mountain where Nicaraguan patriot Augusto Sandino once had his headquarters in 1927.

Sandino, a hero of the Nicaraguan and Latin American left, fought the United States occupation of the Central American nation in the late 1920s. He was assassinated by forces loyal to General Anastasio Somoza Garcia, whose family would rule Nicaragua until 1979, when the Sandinista National Liberation Front overthrew the dynastic dictatorship.

Ortega himself was once held in El Chipote, on orders of dictator Anastasio Somoza DeBayle, for his involvement with the Sandinista Liberation Front.

Now, a prison that was once a symbol of the struggle against right-wing authoritarianism has become a holding cell for Ortega's own dissidents.

Braulio Abarca, a young lawyer from the Nicaraguan Center for Human Rights (NCHR), told DW that activists face a great deal of frustration, but insisted that they needed to stay strong for the families. "They have placed of their hopes on our work," Abarca said.

The director of the Permanent Commission for Human Rights in Nicaragua, Carla Sequeira, was also at the jail and echoed the sentiments of the NCHR's Abarca, adding that even her human rights activist husband was being held too.

The government is "making up crimes" to frame innocent people for the deaths of those killed during the anti-government protests, Sequeira told DW. "They have to blame someone and they won't blame themselves."

"People have all been detained for going to a demonstration, for participating in a street blockade, for bringing food to students behind barricades or for even taking a photo with a Nicaraguan flag and posting it on Facebook," she said.

Family members camping outside of El Chipote have set up tents to shelter themselves from the rain and sun, distribute meals to the group and otherwise organize advocacy efforts. But many have covered their faces and protected their identity for fear of reprisals.

Migdalia Lopez and her daughter Ivania Cruz were too sad to eat lunch. Both are desperately looking for several brothers and friends. They know some are in detention, but have been generally missing from Diriamba since last Sunday.

Lopez cried as she told DW that she worried about the wellbeing of her 29-year-old son, Richard, who is transgender and goes by the name of Kishia Kristelia. She feared he would be tortured and raped in detention. 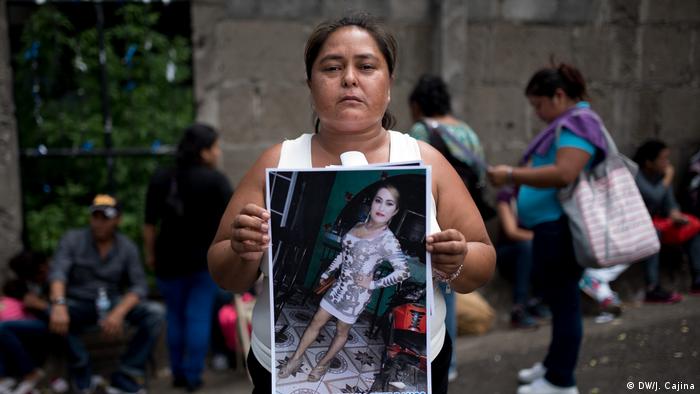 Auxiliadora Diaz, another frightened mother, is searching for her 37-year-old son, Bismarck Arias, who disappeared last Sunday from the city of Jinotepe, also south of Managua and not far from Diriamba. Arias was opening up his shop when pro-government forces descended on the town. A neighbor witnessed the police take him away in the middle of a firefight.

"We looked for him at the police station and he doesn't appear on their lists. They don't even let us report him as missing," Diaz told DW.

She broke down crying as she recounted the only answer she got from authorities — the suggestion that she should look for him "at the morgue or out in the jungle," where bodies are found everyday.