Indian security forces allegedly killed civilians, while Pakistan is accused of quashing peaceful dissent. The UN wants to launch an investigation into abuses by both countries in the disputed territory. 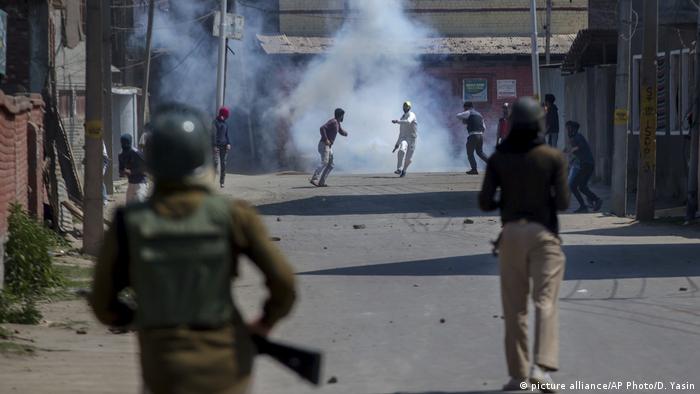 The United Nations on Thursday called for an international inquiry into alleged human rights abuses by India and Pakistan in the disputed territory of Kashmir.

Indian security forces have killed and wounded civilians in the territory since 2016, the UN's human rights agency said in a report, while Pakistan has used anti-terror laws to quash peaceful activists and other forms of dissent.

UN human rights chief Zeid Ra'ad al-Hussein said he would ask the organization's Human Rights Council next week to set up an inquiry into the allegations in the UN's first human rights report on Kashmir. The conflict there "has robbed millions of their basic human rights," he said.

India and Pakistan both claim Kashmir, a mountainous territory between the two nuclear-armed countries, and have fought three wars over it since both countries declared their independence from the British Empire in 1947.

"In responding to demonstrations that started in 2016, Indian security forces used excessive force that led to unlawful killings and a very high number of injuries," it found.

Armed groups have also committed executions, kidnappings and rape against the local population, it added.

Al-Hussein criticized India for turning a blind eye to the abuses. He said a 1990 law gave security forces "virtual immunity" in Kashmir.

Tensions in the territory cooled at the end of May after India and Pakistan agreed to stop exchanging artillery fire along the border in response to a series of deadly skirmishes.