Ukraine's interim prime minister has signed a long-awaited association agreement with the European Union. This came as the Russian president signed legislation approving the country's annexation of Crimea from Ukraine. 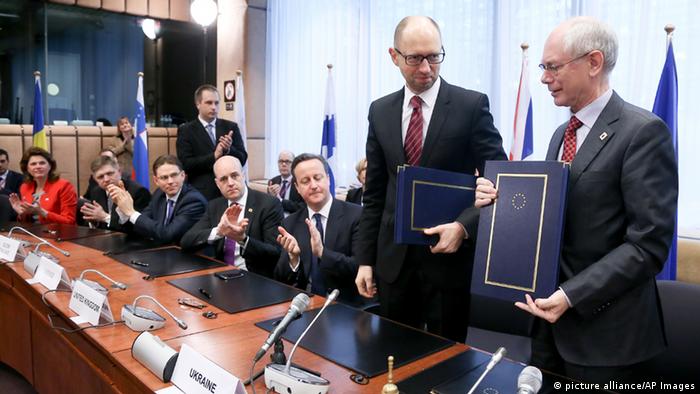 European Union leaders and Ukraine's interim prime minister, Arseniy Yatsenyuk, (pictured) signed several chapters of a broad association agreement on Friday. This was a deal that former Ukrainian President Viktor Yanukovych walked away from last November, in favor of closer cooperation with Russia. This led to months of mass anti-government protests in Kyiv and his eventual ouster.

The agreement is seen as a sign of support for Ukraine's interim authorities and is designed to boost political ties between the EU and Kyiv.

It follows last Sunday's contentious referendum in which Crimeans overwhelmingly supported leaving Ukraine - a vote that has been labeled illegal by Ukraine and Western powers.

Overnight in Brussels, EU leaders decided to slap sanctions on more authorities over Russia's annexation of Crimea. There are now 33 Russian and Ukrainian figures subject to travel bans and asset freezes, with more than a dozen added overnight.

"Russia must understand it cannot continue, that it must take the path of dialogue," French President Francois Hollande said on Friday.

The European Commission is also to prepare what's known as the "third phase" of financial sanctions against Moscow, or an assessment of the likely impact economic sanctions would have on Russia.

Before traveling to Brussels, German Chancellor Angela Merkel told parliamentarians in Berlin on Thursday that it would be unlikely economic sanctions would be imposed immediately.

Moscow has retaliated by issuing its own list of sanctions against certain US individuals, including Republican politicians, like the Speaker of the House of Representatives John Boehner and Senator John McCain, a defeated presidential candidate in 2008.

Along with sanctions, a key concern being discussed is energy, as Russia supplies more than a quarter of the bloc's gas.

"The issue of energy supply for the future is on the table here, and that's something that all EU leaders agree, we need to become less dependant on Russian energy," said DW correspondent Nina Haase from Brussels.

Russia's Duma has approved a treaty to incorporate Crimea into the Russian Federation while UN Secretary-General Ban Ki-moon expressed his "concern" over the situation to President Vladimir Putin. (20.03.2014)