In a historic move, lawmakers in Germany have given the official green light to send "heavy weapons and complex systems" to Ukraine. But many of them also criticized Chancellor Olaf Scholz for not being in Berlin. 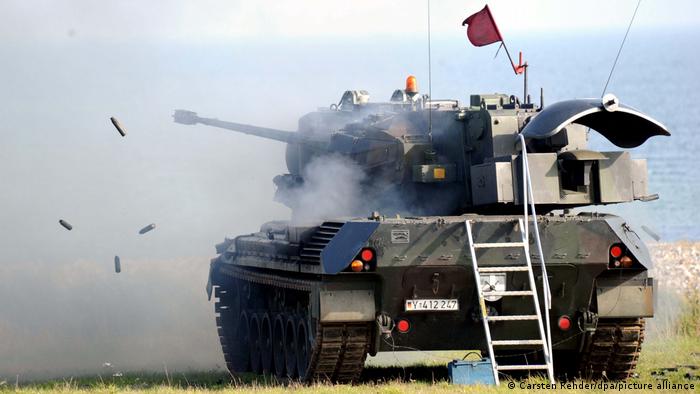 Lawmakers in Germany overwhelmingly voted in favor of providing Ukraine with "heavy weapons and complex [weapons] systems" to aid Kyiv as it battles Russia's invasion.

The petition passed on Thursday, with with 586 votes in favor, 100 against, and seven abstentions.

The vote in the lower house of parliament, the Bundestag, represents a historic shift in policy for Germany — after the government held off for weeks on sending heavy equipment

What weapons will Germany send to Kyiv?

In addition to heavy weapons, such as anti-aircraft systems and armored vehicles, the measure passed by German MPs included provisions for sending heavier equipment to eastern NATO allies as well.

Military aid should continue and accelerate wherever possible, according to the proposal backed by the ruling coalition and the biggest opposition party, the conservative Christian Democrats (CDU).

Germany will also deploy more soldiers to boost NATO presence in eastern Europe, and encourage Russian soldiers to lay down their arms and seek asylum in Germany and the EU.

Additionally, the measure foresees an appeal to China for it to "abandon its acceptance of war" and actively support a truce.

Why did some oppose the deliveries?

The far-right Alternative for Germany (AfD) opposed the initiative, saying that it felt close to a declaration of war.

The motion would prolong the fighting in Ukraine and "could make us party to a nuclear war," said the AfD's most senior Bundestag lawmaker Tino Chrupalla.

Putin: 'Our response to encounter assaults will be lightning fast'

The socialist Left Party was also against the move, pointing to earlier statements by Chancellor Olaf Scholz about how heavy weapons deliveries increase a risk of a nuclear escalation. Scholz, a member of the center-left Social Democrats (SPD), had rejected the idea just days before making a U-turn earlier this week with deliveries of anti-aircraft tanks.

"Every day there is a different course, I can't keep up anymore, and many people in this country feel the same way," the Left Party's  Dietmar Bartsch said. The Left Party also said that delivering more weapons would simply make the war last longer.

In response, Nils Schmid, from the ruling SPD party, said weapons' deliveries would help end the war faster by putting Ukraine in a position of strength.

Schmid also said the initiative was following two basic principles, one of Germany not being at war, and the other principle of "Putin must not win this war."

"This is why we support Ukraine with everything we have at our disposal, politically, diplomatically, economically and of course, in a very measured way, militarily,"  he said.

Scholz under fire for going to Japan

Several lawmakers, including CDU head Friedrich Merz, sharply criticized Scholz for going away on a diplomatic visit to Japan while the Bundestag was debating the conflict in Ukraine. Merz accused the chancellor of "hesitation and timidity."

Scholz took the reins of the German government in December 2021, after his SPD party ousted the conservatives following the political retirement of long-time CDU Chancellor Angela Merkel.

But the move is not likely to help Scholz shake the accusations of being indecisive on Ukraine. A new dpa/YouGov poll suggests some 45% of Germans are unhappy with his course in the crisis, compared to 37% who approve of his response to the war.