Ukraine crisis: Why Imran Khan′s Russia trip will further isolate Pakistan | Asia | An in-depth look at news from across the continent | DW | 25.02.2022

Pakistani Premier Imran Khan chose to meet with President Putin in Moscow, just as Russian forces were invading Ukraine. DW analyzes why the visit is likely to strain Islamabad's ties with Washington and Brussels. 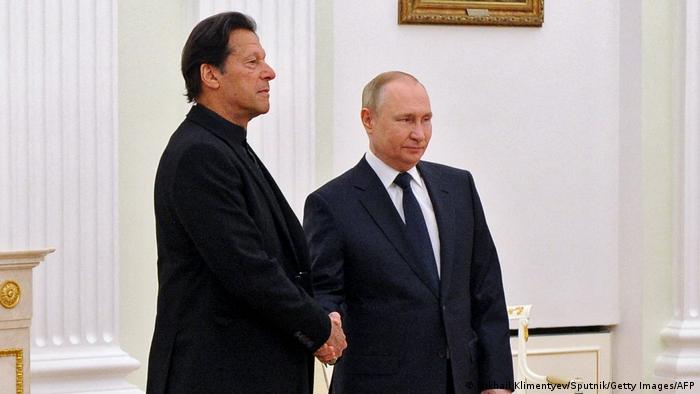 "What a time I have come, so much excitement," Pakistani Prime Minister Imran Khan was heard saying at the airport as he arrived in Moscow on Wednesday ahead of a meeting with Russian President Vladimir Putin.

Khan's statement would prove to be ill-timed, as hours after his arrival, Russia carried out a full-scale invasion of Ukraine.

The West has condemned President Putin with one voice and imposed strict sanctions on Moscow. Russian forces are bombing Ukrainian cities and are closing in on the capital Kyiv. There is definitely more anger than "excitement" about the situation in the West.

However, with Khan's visit, Pakistan's leadership seems to be demonstrating its naivete vis-a-vis the gravity of global politics in the aftermath of Russia's unilateral invasion of Ukraine.

Pakistani officials have insisted that Khan's Moscow trip had nothing to do with the ongoing Russia-Ukraine conflict.

The visit was scheduled much earlier, and Khan and Putin said they discussed bilateral and South Asian affairs during their Thursday meeting.

But experts point out that the timing of Khan's Russia trip was a "diplomatic disaster."

Although Khan is not a huge player in global politics, his meeting with Putin during the Ukraine invasion has carried some immense symbolic value — mostly in favor of Russia.

Pakistan moving toward US rivals

Regardless of what Khan's ministers have said about Pakistan's "neutrality," geopolitical analysts are watching as the world becomes more clearly divided between the Western and China-Russia camps. Islamabad's close ties with Beijing are no secret, but Pakistani authorities maintain that they want good relations with both China and the US. 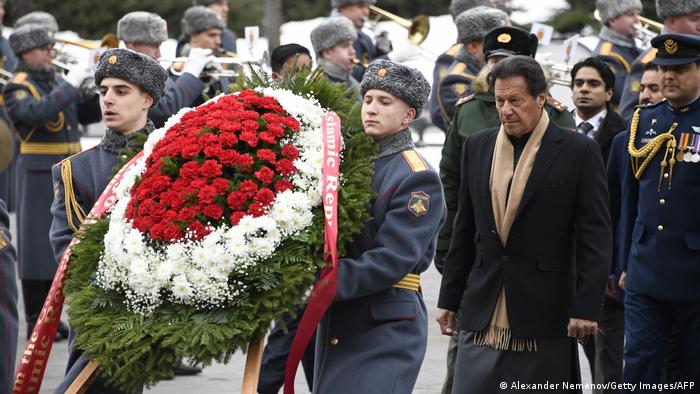 However, the time for "neutrality" from South Asian countries like Pakistan and India is almost over after Russia's Ukraine attack, according to security observers.

"The trip, while overshadowed by the Ukraine crisis, represented a key milestone for a relationship that has quietly grown in recent years," said Micheal Kugelman, a South Asia expert at the Washington-based Woodrow Wilson Center for Scholars, to DW.

"It also amplifies the direction that Pakistan’s foreign policy is taking; one that is increasingly aligning with US rivals and hence suggests the limits of expanding US-Pakistan relations in the years ahead," he added.

US State Department spokesman Ned Price was quite clear on this issue.

"We believe it's a responsibility of every responsible country around the world to voice concern, to voice objection, to what Putin appears to have in mind for Ukraine," Price said on Wednesday, responding to a question about Khan's meeting with Putin.

Pakistan receives substantial military aid from Washington, and its economy is heavily dependent on the International Monetary Fund's loans.

Whether or not Khan has calculated potential repercussions of his Moscow visit, it could have serious consequences for his country's economy.

A 'wrong signal' to the West

"Regardless of what he says, by going to Moscow, Khan has conveyed a message to Europe and the US that he has decided to side with Russia in the Ukraine conflict," Farooqi said.

"He could have easily rescheduled his trip, but possibly, he wanted to put pressure on Washington," he said, adding that even India, which has historically been close to Russia, has so far abstained from taking sides in the conflict.

"EU diplomatic circles have not taken Khan's Russia trip well," according to Farooqi.

Zelenskyy: 'Both military and civilians are under Russian attack'

Maleeha Lodhi, Pakistan's former ambassador to the US, however, believes Khan did the "right thing to press ahead" with his trip.

"The prime minister's visit was scheduled much before the [start of] the Ukraine crisis. The visit was bilateral in nature and not intended to send any signal to the West. The visit helped consolidate the positive trajectory in relations between Pakistan and Russia and explored more areas of cooperation," she told DW.

"The leaders of the two countries discussed the main aspects of bilateral cooperation and exchanged views on current regional topics, including developments in South Asia," said the statement.

Pakistani is facing an acute energy crisis, and one of the reasons behind Khan's Moscow trip was to finalize a gas pipeline deal with Putin.

Trade between Pakistan and Russia, however, is relatively small, with Pakistan exporting $277 million (€247 million) of products in 2019, and Russia exporting $178 million to Pakistan.

"The visit was not substantial in terms of business agreements; instead certain MOUs were signed which were possible without the visit," Talat Masood, a retired army general and security expert, told DW.

Analyst Farooqi said that after the West has imposed heavy sanctions on Russia, Pakistan is no position to do business with Moscow.

It is important to note that while Khan was preparing to visit Moscow, Pakistan's powerful military chief, General Qamar Javed Bajwa, was meeting with EU officials in Brussels.

Although, his visit was "low-key," analyst Farooqi believes it was significant.

"It doesn't want to provoke the West, as Pakistan's security infrastructure relies on the West's support. The generals are pro-West," he said.

Farooqi says that Khan wants to be recognized as being in charge of Pakistan, but in reality, the military generals call the shots in the Muslim-majority country.

"Pakistan is walking a tightrope, although the visit could help Khan domestically," he said.

But Khan's popularity is plummeting in Pakistan, with masses reeling under high inflation and rising unemployment. Meanwhile, opposition parties are hoping to oust him through a no-confidence vote in parliament.

Pakistan: Who's in charge?

The opposition in Pakistan has united against Prime Minister Imran Khan, alleging he is in thrall to the military. A government minister in Islamabad hits back on DW’s Conflict Zone and says it is Khan calling the shots.