Pakistan: Who's in charge?

The opposition in Pakistan has united against Prime Minister Imran Khan, alleging he is in thrall to the military. A government minister in Islamabad hits back on DW’s Conflict Zone and says it is Khan calling the shots.

Mass protests against Imran Khan's government in Pakistan, led by a coalition of prominent opposition figures who accuse him of being sidelined by the country's powerful military and want him to resign, have mounted pressure on the prime minister. But Fawad Chaudhry, a minister in Khan's government, says their charge is "just a non-serious argument."

"I believe that these two and a half years of Prime Minister Imran Khan has actually turned the tide for Pakistan," Chaudhry said, speaking from Islamabad.

Critics have also attacked Khan's failure to get to grips with the country's longstanding economic woes, which underpinned his decision to oppose a complete lockdown, citing the threat to the livelihoods of Pakistanis. 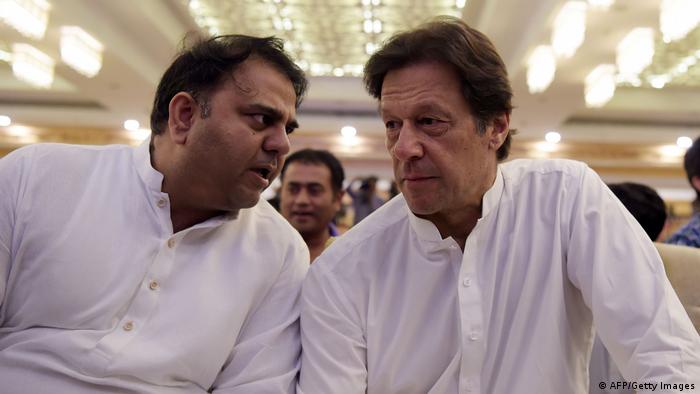 Chaudhry lauded his government's response to the COVID-19 threat, led by the prime minister's policies, he said, and instead there had been partial and "very well-managed lockdowns."

The prime minister was perceived as dithering in the early stages of the global health emergency, leaving an opportunity for the country's military to take a more prominent role and a tougher approach.

"The Pakistani prime minister calls the shots and the Pakistan army supports him," he told Conflict Zone host Sarah Kelly.

Khan, a former cricket star, gained public support too for his pledges to tackle the country's corruption problems.

Since coming to power in 2018, the country's anti-corruption National Accountability Bureau (NAB) has arrested almost a dozen opposition politicians, but none from Khan's own party.

"Why would anyone have been arrested from my party?" said Chaudhry.

Pakistan's Supreme Court expressed serious concerns in 2020 that the NAB was selectively applying the law, while the Supreme Court Bar Association and the Pakistan Bar Council said it had "become a tool for arm-twisting of political opponents of government of the day" and was losing its credibility as a result.

Chaudhry said the NAB was set up long before the Khan government and stood by its operation.

"Maybe you can give this impression to the foreign media that there is witch hunting, but the fact of it is every Pakistani knows that all the cases are based on the merit," he said

Free press or 'climate of fear'?

But as of January, the foreign media now has one less opportunity to report on Pakistan, after the BBC cancelled its daily Urdu-language news bulletin citing repeated "interference."

Human Rights Watch has also reported journalists' increasing self-censorship, as a "climate of fear continues to impede media coverage of abuses by both government security forces and militant groups."

Did the minister, also a former journalist, believe such intimidation was acceptable?

"No, it is not acceptable," said Chaudhry. "I believe media is probably one of the most free media that the world can imagine we have in Pakistan.

"There's no denial of the fact that Pakistani media is very, very powerful. And actually, many people believe there should be strong defamation laws, which are not here, unfortunately, but Pakistani media, I see no problem with the freedom of expression."

Four journalists and a blogger were killed in Pakistan in 2019 in connection with their reporting, according to Reporters Without Borders, which ranks Pakistan 145th out of 180 countries for press freedom.

Experts have said that allowing private companies to purchase the vaccine will lead to unfair distribution. The move has also created fears that the new imports could create a black market for the vaccine.

Why is the Pakistani government cracking down on NGOs?

Prime Minister Imran Khan has tightened the noose around nongovernmental organizations, alleging that they are working against the state. Why is the government so skeptical of civil society groups?