The German and Russian leaders have met in Moscow with Ukraine high on the agenda. Both Scholz and Putin expressed willingness to continue addressing European security issues through dialogue. 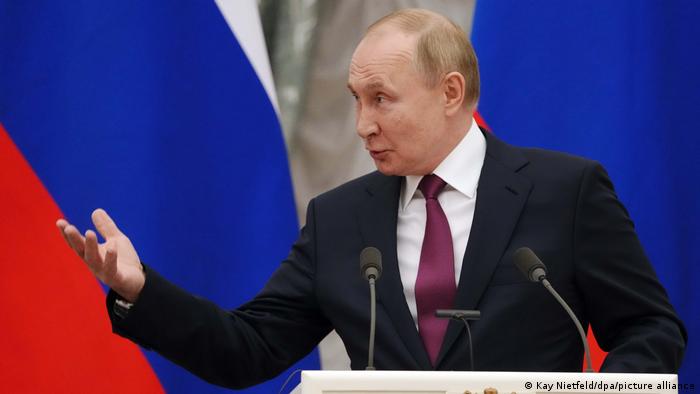 Olaf Scholz made his inaugural visit as German chancellor to Moscow on Tuesday to meet with Russian President Vladimir Putin, with the ongoing crisis at the Russian-Ukrainian border dominating the agenda.

Scholz arrived in Moscow after a trip to Kyiv on Monday, where he met with Ukrainian President Volodymyr Zelenskyy to strengthen Berlin's support in the face of Russian aggression.

"The most important thing is that we manage relations between countries through good discussions with each other," Scholz said as he met Putin, adding he was glad the two leaders were able to meet face to face.

In a joint press conference after meeting, the chancellor said "it is our absolute duty as heads of government that Europe does not see an escalation into war."

Putin added that Germany "is one of Russia's most important partners" and said it intended to cooperate further with Berlin. He emphasized the role of economic ties between the two, with Germany being Russia's second-biggest trade partner after China. 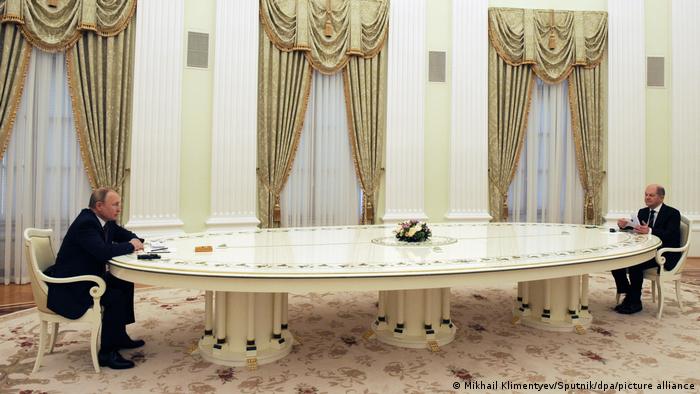 What did Olaf Scholz say about Ukraine?

Scholz said the build-up of troops at the Ukrainian border "can be seen as a threat." However, "we now hear that more troops are being withdrawn that is a positive signal and we hope more will follow," he added.

"For Europeans, it is clear that lasting security cannot be achieved against Russia but only with Russia," he told reporters.

The chancellor added that the "inviolability of borders ... is not to be negotiated," referring to Ukraine.

"Dialogue cannot end in a cul de sac, that would be a disaster for everyone," he added, "it is important to go the road of diplomacy so as to avoid war in Europe."

New York Times Moscow Bureau Chief Anton Troianovski tweeted that Scholz had told German-speaking reporters after the press conference that "all involved" know Ukrainian NATO membership is not on the agenda.

"We just can't have a possible military conflict over a question that is not on the agenda," Scholz said, adding that such a situation would be "absurd."

Responding to a question from DW's Michaela Küfner about the possibility of war, Putin responded: "We do not want war in Europe."

The Russian president then referred to Scholz's earlier comment that "people of this generation find it hard to imagine war in Europe."

"That is exactly why we have made our proposals, to start a process of discussion over equal security for everybody

On NATO, Putin said that "countries have the right to join military alliances as our colleagues in NATO always maintain, but it is also important to maintain one's security not at the cost of the security of other countries."

"We are also willing to continue the discussion process," the Russian president added.

On economics, Putin said Germany "is one of Russia's most important partners" and said it intended to cooperate further with Berlin. He emphasized the role of economic ties between the two, with Germany being Russia's second-biggest trade partner after China.

With reference to the Nord Stream 2 gas pipeline, he said "let me make clear that we are willing to continue shipping gas through Ukraine beyond 2024."

A major issue among Western powers with Nord Stream 2 has been its position in sidestepping Ukraine, which relies on gas revenue that is transported through the country.

Germany has found itself in a difficult situation regarding the threat of a Russian invasion of Ukraine. It is both a member of NATO and an important trade partner for Russia.

Berlin has repeatedly vowed its support for Ukrainian sovereignty, but has been less keen on threats of abandoning the controversial Nord Stream 2 gas pipeline that would bring Russian fuel directly into Germany.

Germany has also been criticized for refusing to sell weapons to Kyiv due to the region being an active conflict zone.

Scholz's trip is a "last-minute attempt... to avoid war" but it is "'up to Putin to now send signals for de-escalation," conservative German lawmaker Thomas Silberhorn told DW on Tuesday.

Regarding a course of action for sanctions, Silberhorn warned they would go "far beyond economic" ones, with "the entire relations between Russia and Western countries" being at stake.

Asked about Germany's stance on Nord Stream 2, Silberhorn said "Germany is ready to include the Nord Stream 2 pipeline into a variety of sanctions of the Western countries," but as part of a broader sanctions package.

US Ambassador to NATO tells DW: 'No evidence of de-escalation'

US Ambassador to NATO Julianne Smith told DW's Alexandra von Nahmen in an exclusive interview that the US and NATO are prepared to sit down and engage in a dialogue with Russia and hopefully deescalate the situation. However, she added that there is no evidence of Russian claims that troops are being pulled back from the Ukraine border.

"We don't have any evidence that that's occurring," Smith said.  "We'll want to step back and spend some time verifying that claim," she added.

Asked about the NATO unity and Germany's role when it comes to Russia, Smith said "In this moment, as we all think about Russian aggression and what Russia is doing to destabilize European security more broadly, there's no question, in my mind, that we are united as an alliance."

Scholz said he had also discussed with Putin the possibility of Deutsche Welle being given back its broadcasting rights in Russia.

The Kremlin recently banned the broadcasting of Deutsche Welle in Russia after the Russian state-backed channel RT failed to secure a legal license for broadcasting in Germany.

Scholz said he expects that "Deutsche Welle will be able to continue its work in Russia." At the same time, Putin said he was open to further discussions on the matter.

Scholz to meet Putin for talks on Ukraine crisis