Ukraine crisis: How far can China go in supporting Russia?

China has paid lip service to respecting the "territorial integrity" of Ukraine but has so far refused to call Russia's invasion what it is. Beijing could soon be forced to make an uncomfortable decision. 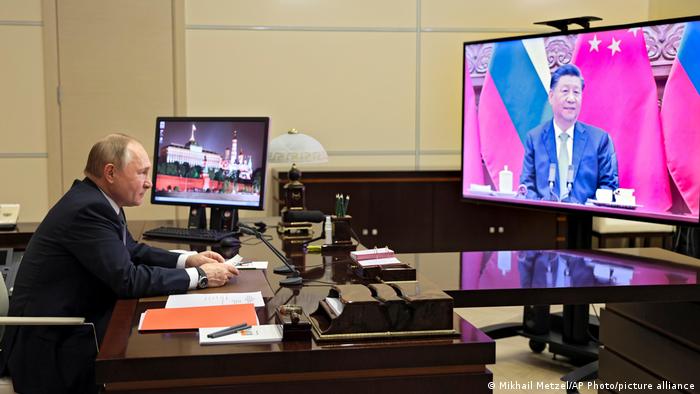 China and Russia have been building closer ties, but the Ukraine will challenge Beijing to take a side

During the Munich Security Conference last week, Chinese Foreign Minister Wang Yi said the "basic norms" of international relations include respecting the "sovereignty, independence and territorial integrity" of any country, including Ukraine.

Several days after Wang's address, Russia launched a full-scale invasion of Ukraine by ground, air and sea, from three directions, fulfilling what Western intelligence services have been predicting for months.

In a press conference on Thursday, Chinese Foreign Ministry spokeswoman Hua Chunying criticized journalists' use of the word "invasion" as a "typically Western" method of questioning.

As Russian rockets pounded Ukrainian cities, Hua then repeated what has become China's standard response to the conflict, calling for "all sides to exercise restraint to prevent the situation from getting out of control."

Later that day on Twitter, Hua claimed that China stands for "justice and peace," adding that countries "resolve international disputes peacefully in line with the purposes and principles of the UN Charter."

Beijing is aware that the UN Charter prohibits the use of force in international relations except in cases of self-defense.

Is China's Foreign Ministry giving an indirect hint to Moscow to call off the invasion, even if Beijing does not want to use such terms?

This is unlikely. It is more probable that Beijing will continue to apply rhetoric attempting to convince the world China is a peace-loving nation, while at the same time tacitly supporting Putin by accusing the US of being a warmonger, China expert Didi Kirsten Tatlow, from the German Council on Foreign Relations, told DW.

China's peaceful rhetoric will be less effective unless Beijing takes "concrete and public actions" to oppose Russia's aggression in Ukraine, she said.

A test of the position that China is prepared to take will come during an urgent meeting of the UN Security Council on Friday to vote on a US-led resolution condemning Russia's aggression in Ukraine.

If China abstains, as expected, its tacit support of Moscow "will become even more apparent," Tatlow said.

President "Xi Jinping is clearly not interested in joining forces with the US," Tatlow added. "He and the Chinese Communist Party publicly reject democracy. It is not reasonable to expect him to change his position fundamentally. He would see that as 'selling out' China," she said.

"Perhaps if the situation develops very negatively for China, he may change his position," Tatlow said, "but we cannot know that yet."

China's UN envoy, Zhang Jun, said Thursday that the "door to a peaceful solution has not yet completely shut," despite Ukrainian authorities' reporting Friday that more than 130 people were killed in the first day of the invasion.

China asks for 'all parties to exercise restraint'

For years under Xi, China has worked on presenting its system as an alternative to the Western-led model of international order.

Tatlow said China was in a tough spot — forced to choose between supporting its Russian partner in changing the international order and suffering massive reputational damage by siding with a rogue state that is invading a sovereign country.

"The coming days and weeks will show what China chooses and if it can finesse a position between these two poles that enables it to save face but also to remain friends with Russia," she said.

What did Xi know during his meeting with Putin?

Xi and Putin met for talks on February 4 during the opening of the Olympic Games in Beijing and issued a joint statement, which among other things, condemned the eastward expansion of NATO.

After this week's full-scale assault on Ukraine, China's Foreign Ministry was asked if Xi had prior knowledge of Putin's plan to launch an invasion.

Spokeswoman Hua said Russia was an independent power that did not need to seek the consent of China.

"It independently decides and implements its own diplomacy and strategy according to its own strategic judgment and interests," she said.

Tatlow said Xi must have had some idea of what may lie in store.

"We don't know how much Xi knew on February 4, when he and Putin issued a statement in Beijing about the 'beginning of a new era' and 'borderless cooperation,'" Tatlow said. "It is possible that he underestimated Putin. But it's hard to imagine that Beijing was so ill-informed, or at least didn't consider that possibility," she added.

US Deputy Secretary of State Wendy Sherman noted at a panel in late January that an invasion of Ukraine before the start of the Winter Olympics would "probably not be met with enthusiasm" from Xi.

Sherman said that could be a consideration "that Putin may take into account in his timetable for further action against Ukraine."

Putin, Xi usher in partnership with 'no limits'

A pipeline linking Russian gas with China means that Moscow is driving ahead with gas exports to China, which could allow it to tighten the screws further on EU consumers. Others say it could blow up in Moscow's face.

Why Russians are denouncing opponents of Ukraine invasion 07.07.2022

Denunciations in Russia began soon after Vladimir Putin launched his invasion of neighboring Ukraine. DW spoke with an anthropologist, a psychologist and a historian about people's motivations for turning dissidents in.