Many world leaders, athletes, and stars have condemned Russian agression against its neighbor. Read the latest here. 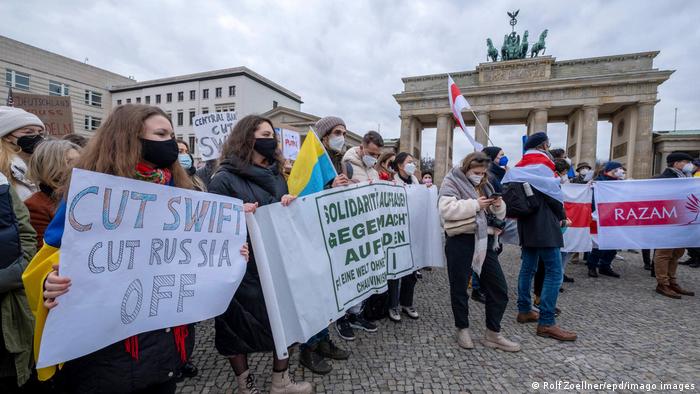 Protests against the invasion also took place in several countries on Thursday, including in central Berlin

Von der Leyen also promised to level the harshest possible sanctions on Russian leaders and businesses, saying that "we will target strategic sectors of the Russian economy by blocking their access to key technologies and markets."

"In addition," she added, "we will freeze Russian assets in the EU and stop the access of Russian banks to the European financial market."

Here's how other leading figures reacted across the globe.

German Chancellor Olaf Scholz expressed solidarity with Ukrainians, saying the assault was completely without justification and calling it "Putin's war."

"It will be clear that Putin has made a terrible mistake by unleashing this war," Scholz said, adding that Russia would pay a "bitter price" for invading its neighbor, and that additional rounds of sanctions were already in the works.

Later on Thursday, Scholz addressed the nation, saying: "We are determined and acting as one. Therein lies ours strength as free democracies. Putin will not win."

Scholz added that "there is no going back in time to 1986," saying that Cold War politics, wherein large countries decided the fate of smaller ones, would not return. He said that Putin was trying to turn back the clock.

In a televised statement, French President Emmanuel Macron, who held talks with Putin just last week, said the attack represented a "turning point in European history" and, as a result, "there will be profound consequences for our continent and changes in our lives."

"We have tried everything to avoid this war but it is here and we are ready," Macron said. "We will show no weakness," he added. "We will take all measures necessary to defend the sovereignty and stability of our European allies."

British Prime Minister Boris Johnson said the UK would be stepping up its support to Ukraine in an address to the nation. He said Ukraine "is not some faraway country" and added, "we cannot and must not look away."

"I don't believe the Russian dictator will subdue the Ukrainians and their passionate belief that their country should be free," Johnson said.

The UK, like the US and EU, has already implemented a raft of sanctions.

Japan, which usually treads more lightly with Moscow than other G7 nations, said it would work with Western allies to counter Russian aggression.

At the same time, South Korea's President Moon Jae-in said that his country "supports and will join economic sanctions and other international efforts to deter the armed aggression and resolve the situation peacefully."

China, which often backs Moscow on the international stage, took a cautious line, not fully condemning Russia but calling for a "peaceful solution." Foreign Ministry spokesperson Hua Chunying said that "China did not wish to see what happened in Ukraine today."

India's Prime Minister Narendra Modi, who has been friendly with Putin in the past, said he spoke with the Russian president on the phone, and called for "an immediate cessation of violence" as well as "concerted efforts from all sides to return to the path of diplomatic negotiations and dialogue."

Although Iranian Foreign Minister Hossein Amirabdollahian blamed "NATO provocations" for the attack, he wrote on Twitter that it was "imperative to establish a cease fire and to find a political and democratic resolution."

Israel announced that it would accept all Ukranian refugees. Foreign Minister Yair Lapid condemned Russia’s actions, and said his country was "ready and prepared to provide humanitarian assistance to the citizens of Ukraine."

In the United States, President Joe Biden said in speech that "we’ve been transparent with the world, we’ve shared intelligence…so there could be no confusion about what Putin is doing. Putin is the aggressor. Putin chose this war."

Biden then announced a new raft of sanctions, which targeted Russian banks and industry.

"Ukraine's sovereignty and territorial integrity must be respected and the Ukrainian people must be free to determine their own future," Trudeau said.

Many celebrities, from horror novelist Stephen King to rapper Cardi B, also spoke out against the attacks. Formula One champions Sebastian Vettel and Max Verstappen said they would not participate in the Russian Grand Prix in September if it goes ahead under the current circumstances.

Vettel said that "I’m sorry for the innocent people that are losing their lives, that are getting killed for stupid reasons and a very, very strange and mad leadership."

Several Russian celebrities, while not calling out Putin by name, condemned the war. Beloved television chat show host Ivan Urgant wrote "no to war" on his Instagram, under a post that was simply a black square.

Maxim Galkin, a comedian, musician and husband of megastar Alla Pugacheva, also posted a black square, saying "no to war!"