How Russia′s invasion of Ukraine threatens geopolitical order | World | Breaking news and perspectives from around the globe | DW | 25.02.2022

Vladimir Putin's decision to invade Ukraine has upended assumptions about the sanctity of borders and thrown the world into a whole new situation, security experts say. 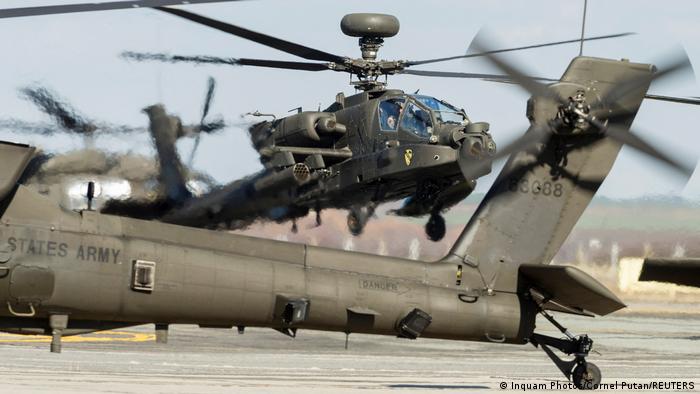 Russia's invasion of Ukraine has challenged NATO, the United States and the world order

Russia's invasion not only threatens the sovereignty of Ukraine, but has undermined the entire geopolitical order, according to German security experts. "Today almost everything is different from yesterday," political scientist Johannes Varwick, of the University of Halle, told DW. "We are now back in a kind of confrontation of blocs, only the borders of the Western bloc have shifted eastward compared to the time of the Cold War. Peace in Europe is a thing of the past, and trust in Russia has been completely destroyed. It will take decades to restore trust between the West and Russia."

President Vladimir Putin's decision to send troops across the border of a sovereign nation — the largest such invasion since World War II — has set what many see as a terrifying precedent.

Rafael Loss, security policy specialist at the European Council on Foreign Relations (ECFR), told DW that he thinks the long-term consequences are still difficult to assess in the current crisis, but "at least in parts of Europe, it looks like the post-1990 order is in ruins — mostly for the in-between countries, unfortunately, the countries that are not already part of NATO or the European Union."

For those nations, the security situation looks much bleaker. "We might end up in a situation where the in-between spaces are being contested, where the ability of NATO and the EU to protect their influence is contested," Loss said. "It will be more about defending the countries that are already in these clubs rather than seeking alignment with the countries who aren't."

Dependence on the US

This is likely to mean that European countries will once again, as in the Cold War, become more and more dependent on the United States to guarantee defense, and the borders to Russia's sphere of influence will become militarized. "We must now reactivate the old concept of containment against Russia," said Varwick. "This means that we must strengthen NATO's eastern flank and use deterrence against Putin. It is clear that Ukraine lies behind this border. Now it's a matter of protecting the NATO members from Romania to Bulgaria, these countries are in a better situation as NATO states and can withstand possible aggression by Russia."

This represents a dramatic reversal of the peaceful order that many envisioned in the aftermath of the fall of the Soviet Union, when NATO and also the European Union began taking in new member states and countries outside of the EU were successively folded into regulatory frameworks — such as energy networks — in partnership with the EU. "Now we've been thrown back into a situation where Europe and NATO countries are no longer as willing to engage with countries further east," said Rafael Loss.

For Putin, Thursday's incursion is entirely justified by NATO's expansion in the early post-Soviet years, and the subsequent US interventions in Iraq and Afghanistan. "Putin believes he is justified in moving the borders by force, because in his view NATO has done so as well," Loss told DW. "He believes NATO used Russian weakness throughout the 1990s to redraw borders in the former Yugoslavia, to carve out Kosovo from Serbia."

The West, meanwhile, can point to Russia's many violations of international order over the past few years, including interference in countries such as Georgia — where the Kremlin recognized the breakaway states of Abkhazia and South Ossetia in 2008 — and Russia's annexation of Crimea from Ukraine in 2014. The latter move already violated the Helsinki Final Act of 1975, which was meant to enshrine the sanctity of borders. "That is something that successive Russian leaders have participated in negotiating and agreed to," said Loss.

Ripple effect around the world

There is also a danger that Russia's provocation of the international order could also have a destabilizing effect on other parts of the world where crisis regions are being held together by fragile agreements and guarantees from other powers.

What could Thursday's events mean, for instance, for China's disputed claims to Taiwan? "I find it difficult to make a direct connection between Ukraine and Taiwan," Loss said. "There's a long-standing commitment to Taiwan from the United States. I think it would be a mistake to assume that, because the US doesn't intervene militarily on behalf of Ukraine, it wouldn't do so on behalf of Taiwan. But of course, the long-term political trends might encourage at least testing the credibility of US security guarantees vis a vis Taiwan."

But the larger situation remains worrying: Loss said Russia's intervention in Ukraine opened the possibility that other alliances could be tested and that new regional arms races could recur. "If the whole alliance architecture starts to crumble, and it seems to be in the Kremlin's interest to make it crumble, that would put a lot of pressure on a range of countries to at least flirt with nuclear proliferation, and that would have second- and third-order effects in regional security relations," said Loss. "For example, if Turkey decided to go that route, what would that mean for Saudi Arabia and Egypt?"

Lambsdorff: Afghanistan shows Germany must be realistic on military intervention

Germany is now likely to face intense pressure, both domestically and internationally, to boost its defense spending and retool its army. On Thursday, Army Inspector Lieutenant General Alfons Mais, one of Germany's most senior soldiers, wrote on LinkedIn, "In my 41st year of service in peace, I would not have believed that I would have to experience another war. And the Bundeswehr, the army I am privileged to lead, stands more or less bare. … The options we can offer policymakers to support the alliance are extremely limited."

Overnight, Putin's decision seems to have made the world less safe. If security analysts are to be believed, it is now a world where political relations could become increasingly being determined by military strength.

Christoph Hasselbach contributed to this report

Russia invades Ukraine: What you need to know

Casualties, shelling, Russian tanks and emergency meetings to coordinate the West's response. DW has an overview as a Russian war on Ukraine unfolds.

NATO: Why Russia has a problem with its eastward expansion

After its Soviet enemy crumbled, NATO kept growing. Whether that helped ensure peace or constitutes a threat is still debated today — and plays into Russian actions towards Ukraine.

How is China reacting to the Russia-Ukraine crisis?