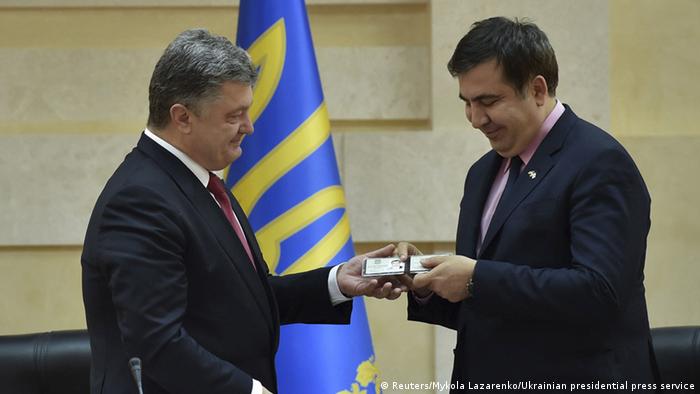 Ukrainian President Petro Poroshenko hailed Mikhail Saakashvili as a "great friend of Ukraine" as he announced the appointment of ex-Georgian president as Odessa's governor at the country's Black Sea port on Saturday.

Odessa, which has Ukraine's largest port, is a strategically important for Kyiv as it is the major city between the Moldovan separatist region of Transdniester and Crimea, which was annexed by Russia last year. The city has not been directly affected by fighting between pro-Russian separatists and Ukrainian forces, but tensions between Ukrainian and Russian supporters have been simmering in the region. Last May, 48 people died in clashes between the both sides.

"There remain a large number of problems in Odessa: preserving sovereignty, territorial integrity, independence and peace," Poroshenko said at a televised event alongside Saakashvili.

A signal to Moscow

Saakashvili's appointment is being looked at as a signal from Kyiv to Moscow that the country remains on a pro-European course despite an ongoing armed conflict in its eastern regions, which has killed over 6,300 people. Ukraine blames Russia for backing the separatists, an allegation that Moscow denies.

The 47-year-old former Georgian president, who came to power after the famous 2003 Rose Revolution, became Moscow's arch-enemy as he pulled the small ex-Soviet state out of Russia's influence and closer to the West. Under Saakashvili, Georgia also fought a brief war with Russia in 2008, in which the country lost control of two of its separatist regions.

"Our main aim is to leave behind the artificial conflicts that have been artificially imposed on this amazing society," Saakashvili said after his appointment. "Together with the president and his team, we are going to build a new Ukraine," he added.

Moscow officials had lashed out at Saakashvili's appointment ahead of the official announcement.

"Saakashvili - accused of numerous crimes against the Georgian people - gets appointed governor of Odessa" Konstantin Dolgov, a Russian Foreign Ministry official, wrote on Twitter. "This is deeply symbolic of Kiev's style of democracy."

Saakashvili had been living in exile until recently after Georgian authorities issued his arrest warrants for abuse of power charges which the former president has said are politically motivated. He was made a Ukrainian citizen shortly before his appointment as governor.