EU warns Georgia against 'selective justice' as Saakashvili bows out

The EU has cautioned Georgia against applying selective justice during a visit to Brussels by President Mikheil Saakashvili. Speculation has arisen that Tbilisi may bring charges against the leader when he leaves office. 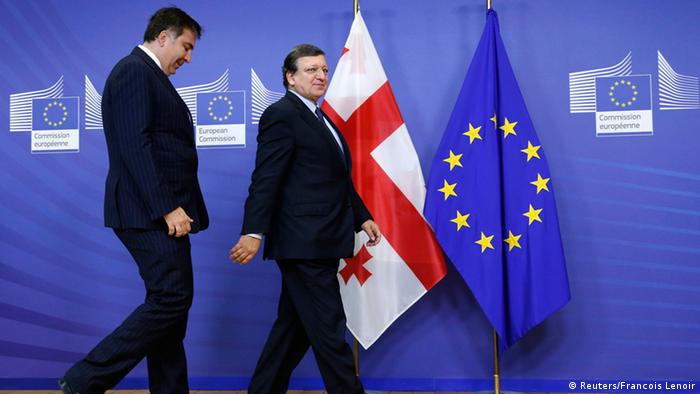 The issue is contentious one, with Saakashvili having said that he faces likely criminal charges - at the behest of his arch political foe Prime Minister Bidzina Ivanishvili - once he leaves office next month. At that stage, his immunity from prosecution would run out with abuse of office one possible charge that could be brought against him.

"We expect Georgia to honor its obligations, such as ensuring that the courts operate free of political influence," Barroso said. "We are completely against any form of selective justice," he added.

The comments came a month before the government of Prime Minister Bidzina Ivanishvili - who has announced he is to stand down - hopes to sign an association and free trade agreement with Brussels at the EU's Eastern Partnership summit in Vlinius, Lithuania, in late November.

End of a political era in Georgia

The landmark deal, however, is dependent on advances in areas such as democratic reform and the rule of law.

Saakashvili, a US ally whose second and final term comes to and end next month, lost further ground to Ivanishvili on Sunday in the country's presidential election. The candidate aligned with Saakashvili lost badly to Ivanishvili ally Giorgi Margvelashvili.

After that defeat, Saakashvili said he had been threatened with judicial procedures when he leaves office, claiming that the administration had "even named the particular prison I am to be sent to."

Saakashvili, who was for many years pre-eminent in Georgian politics after the pro-democracy Rose Revolution in 2003, when he became president, has few friends in the Kremlin. In 2008, Russia fought a five-day war with the Caucasus nation in which Georgian forces were soundly beaten by the Russian army in the breakaway province of South Ossetia.

Saakashvili has said that Russia has made it a "very clear condition" of the normalization of relations that he be killed or imprisoned.

While Saakashvili has won plaudits for cutting corruption and building new infrastructure, he has also angered those who felt sidelined amid the rapid pace of change. His perceived use of the police force to crush opposition has also damaged his image as a democrat.

'You need a rest'

The AFP news agency reported a source close to Saakashvili as saying he had been encouraged by US officials to travel to the US.

The situation has been likened to that in Ukraine, where opposition leader Yulia Tymoshenko was jailed for seven years in 2011 for abuse of office. On Tuesday, EU mediators resumed an effort to secure Tymoshenko’s release ahead of an association and free trade agreement, also planned for the Lithuania summit.