Lawmakers in the UK’s House of Commons have voted against Prime Minister Theresa May's Brexit deal. The government had claimed it had secured "legally binding" changes to its withdrawal agreement with the European Union. 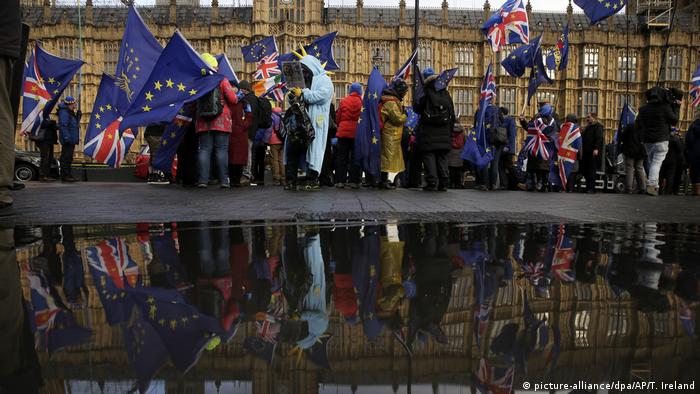 The British Parliament has voted not to support a Brexit deal secured by Prime Minister Theresa May and EU negotiators. But opposition lawmakers, including Labour Party leader Jeremy Corbyn, had vowed to oppose it despite the EU's latest clarifications.

22:00 German Foreign Minister Heiko Maas says that the defeat "brings us closer to a no-deal scenario" and that "Germany has prepared itself as well as it possibly can for the worst of all possible outcomes."

21:15 The European Commission and the 27 EU member state governments warned in a joint statement that the British Parliament's rejection of May's deal "has significantly increased the likelihood of a 'no-deal' Brexit."

20:50 Guy Verhofstadt, the EU Parliament's Brexit representative, says UK parties need to form a national consensus on Brexit to find a way out of the current crisis. "If this happens we will fully engage," he said.

20:45 Dutch Prime Minister Mark Rutte has said that he also regrets the outcome of tonight's vote. He wrote on Twitter that the UK will need a "credible and convincing justification" if they vote to extend Article 50, thus giving Britain more negotiating time.

19:51 European Council President Donald Tusk said that Europe regrets the decision, as the longer the UK takes to reach a decision, the likelihood of a no-deal exit increases.

"We regret the outcome of tonight's vote," Tusk's spokesman said. "On the EU side, we have done all that is possible to reach an agreement ... it is difficult to see what more we can do."

"With only 17 days left to 29th March, today's vote has significantly increased the likelihood of a 'no-deal' Brexit ... Should there be a UK reasoned request for an extension," the 27 remaining EU states "will consider it and decide by unanimity."

19:31 The SNP's Ian Blackford has called for a second referendum on EU membership.

19:30 Labour leader Jeremy Corbyn has suggested that the UK hold a new general election in light of the lack of support for Theresa May's plans for the future of the country. He said that his party will put its plan forward again, insisting that the House of Commons unite around a plan that can be negotiated.

May said she was conscious of a need to honor the referendum but that she realized the importance of securing a deal. However, May said a no-deal Brexit remained the government’s default unless there was a deal.

"I have personally struggled with this choice as I am sure many other honorable members will. I am passionate about delivering the result of the referendum. But I equally passionately believe that the best way to do that is to leave in an orderly way with a deal and I still believe there is a majority in the House for that course of action."

19:23 Lawmakers in the UK’s House of Commons have voted against Prime Minister Theresa May's Brexit deal by 391 votes to 242.

19:05 Voting is now underway in the House of Commons, with reports that a large number of Conservative MPs appear to have passed through the "No" division lobby, against the government deal.

18:34 The EU's chief Brexit negotiator, Michel Barnier, warned on Twitter of the "dangerous illusion" espoused by some pro-Brexit MPs that "the UK can benefit from a transition in the absence" of a complete withdrawal agreement.

The tweet seemed to be referencing a comment made half an hour earlier by former Foreign Secretary Boris Johnson, a supporter of Brexit.

17:46 With it looking doubtful that the prime minister will get the votes she needs, parliament is set to vote on Thursday as to whether to extend Article 50, giving the UK and the EU more time to negotiate.

16:44 Scottish National Party (SNP) leader Ian Blackford said that a no-deal Brexit would be "catastrophic" and that MPs must vote against it.

62 percent of Scots voted for the UK to remain EU in 2016. The overall referendum results went down particularly bitterly in Scotland, where a move for independence eight months earlier was defeated, partly because it would have meant that Scotland would have to re-apply to join the EU.

16:20 Jeremy Corbyn says that parliament should reject the prime minister's deal, and that he believes there is still a way for MPs to craft a more sensible agreement.

Corbyn accused May of spending the last three months "running down the clock" to the March 29 deadline. "Despite extensive delays, achieved not a single change to the withdrawal agreement, not one single word has changed."

16:05 Theresa May has finished her speech, calling for the government to deliver what voters asked for.

15:57  The DUP has announced that it will not support May's deal. The party said in a statement that "sufficient progress has not been achieved at this time."

15:41 The president of the European parliament, Italy's Antonio Tajani, responded to Attorney General Cox's statement about the Irish border backstop. He said that the legal issues raised by Cox were "an internal problem of the UK."

"We are very clear," he said, "it is impossible to change our position."

15:28 Prime Minister May tells parliament that she has secured the best changes to the deal available. Answering the question of an MP from her Conservative party, she confirms that if Britain voted to extend the negotiation period, all EU member states would have to agree and would potentially be able to set the conditions of the extension.

15:08 — May tells British lawmakers they have a choice: "Vote and support this deal, and we leave the European Union with a deal … or risk no deal or no Brexit."

"If this deal is not passed, then Brexit could be lost."

14:03 — DUP leader Arlene Foster told RTE News that the party will discuss the clarifications with May ahead of the vote.

13:59 — Nigel Evans, a key pro-Brexit Conservative lawmaker, said he would back May's deal during the parliamentary vote.

"It's not ideal, it's not the best deal that I would have loved, but I do fear that if we don't get this through tonight, there is the risk that on Thursday parliament will instruct her to get an extension to Article 50, and that is something I don't want to see happen," Evans said.

13:35 — A group of eurosceptic lawmakers announced their decision to vote against May's deal. "In the light of our own legal analysis and others we do not recommend accepting the government's motion today," said Bill Cash of the European Research Group, which is known for its hard-line stance on Brexit.

"Today is an important day," Merkel said. "I think that the 27 member states, represented by Jean-Claude Juncker and Michel Barnier have again made clear and far-reaching proposals that take into account the concerns of Great Britain and to find answers for them."

He said that it makes "times of the essence" for negotiating a trade deal after Brexit. Cox said that he hasn't changed his legal opinion, but instead acknowledges that the guarantees give the UK "legal rights" if the EU failed "in its duties of good faith."

11:55 — Labour's Brexit chief Keir Starmer said Cox's advice shows that the government has failed to deliver on its promise to gain significant legal changes to the backstop.

"The attorney general has confirmed that there have been no significant changes to the (EU) withdrawal agreement despite the legal documents that were agreed last night," Starmer said. "The government's strategy is now in tatters."

11:25 — Attorney General Geoffrey Cox said that while the latest clarifications could reduce the UK's risk of an indefinite backstop, "the legal risk remains unchanged." As such, Cox did not revise his previous statement that the backstop leaves little legal room for the UK to exit the agreement.

Cox's legal opinion sent the British Pound's value down after it had made significant gains in response to May's announcement of the changes.

11:14 — House of Commons leader Andrea Leadsom said there will only be one government oral statements in parliament ahead of the vote. She noted it will be the attorney general's legal opinion on the latest clarifications secured by May.

10:29 — Irish Prime Minister Leo Varadkar said that the latest documents put forward by EU negotiators and May add an "additional layer of interpretation, clarification and elaboration to the UK."

"It does not reopen the Withdrawal Agreement, or undermine the backstop of its application," Varadkar said in a tweet." It says that we will work together, in good faith in pursuit of a future relationship that ensures that the objectives of the Protocol, particularly the need to avoid a hard border, are met."

10:11 — Former Brexit minister David Davis said Attorney General Geoffrey Cox's legal opinion on the EU's latest "legal" changes to a draft Brexit deal will be crucial for the vote to pass. "It is critical that he confirms we can escape this backstop," Davis said in a tweet.