Turkish presidential spokesman: ′We′re taking care of our own national security′ | News and current affairs from Germany and around the world | DW | 27.11.2019

"We have had a very clear policy line on this issue," Kalin told DW's Conflict Zone host Tim Sebastian during a special interview organized as part of the Berlin Foreign Policy Forum in cooperation with the Körber Foundation. 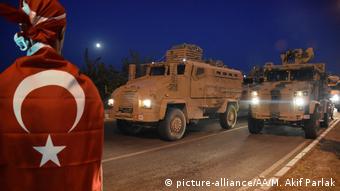 "We do not want to see any terrorist elements taking over a piece of land, ruling over people in Syria, whether by PKK (the Kurdistan Workers Party), ISIS, al-Qaida or any other groups," Kalin said.

Turkey launched 'Operation Peace Spring' in October against Kurdish militias in Syria after President Recep Tayyip Erdogan spoke with his US counterpart.

Following the phone call, Donald Trump ordered the withdrawal of American troops from the area.

The move left the Kurdish forces in Syria, who had fought with the U.S., on their own.

The Turkish offensive drew criticism in Washington and raised concerns about its humanitarian impact. 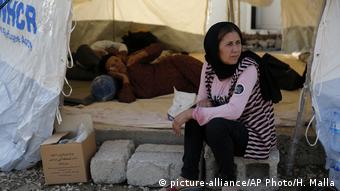 Tim Sebastian cited James Jeffrey, the US special representative for Syria, who said Turkey had undermined the campaign against the so-called Islamic State, had endangered and displaced civilians and threatened the security of the area. 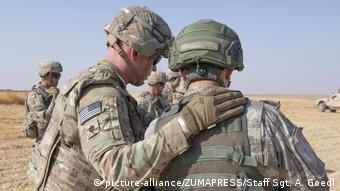 US and Turkish troops in Syria 7 October 2019

But Kalin dismissed that accusation and stressed that "none of that happened."

"They said that there would be a huge humanitarian crisis with the Turkish military operation. It didn’t happen. People went back to their homes," he added.

Pressed by Sebastian on possible war crimes as part of the Turkish offensive, the  presidential spokesperson said that a number of investigations had been launched.

Kalin refused to go into detail about them, saying that "some of them are operational details" which he would rather not share.

Sebastian also pointed to a comment by William Roebuck, the top American diplomat in northern Syria, who in November said that Turkey’s military operation was an "effort at ethnic cleansing."

Kalin simply said the Trump administration had not been able to "reconcile with the fact that we are taking this action against their so-called allies."

"They are reconciling themselves with a PKK terrorist network in Syria giving them a piece of land, while at the same time talking about serious territorial integrity or ethnic balance in Syria," he added.

But as well as dealing with criticism on the military offensive from abroad, Turkish authorities have also tried to stop criticism from within the country.

A report by Amnesty International said Turkey's broadcast regulator, RTUK, had warned media outlets that there would be zero tolerance of broadcasting that would negatively impact the soldiers' morale or mislead citizens through information "that serves the aims of terror."

Kalin said there are "all kinds of different views attacking the president every single day" in Turkey.

When Sebastian mentioned that nearly a thousand social media accounts had been closed down for sharing criminal content in the first week of the offensive, Kalin said that they were "spreading terrorist propaganda."

Kalin stressed that journalists "who do their job" are free to report, but then criticized "those who spread propaganda" and "function as PKK operatives."

The spokesperson remained vague when Sebastian asked him about investigations on torture in Turkey.

The NGO Freedom From Torture said that between 2011 and 2016, Turkey was one of the top 10 countries for referrals after torture. In 2016 it moved into the top five.

Kalin simply said that "a number of investigations have been carried out," but did not offer any details about them.

He did nevertheless add that Turkey has "a zero tolerance policy towards torture."

"We have in fact cleared our prisons, our judicial system from torture. We have had this in the past," he said.

Tim Sebastian then cited the Council of Europe’s Commissioner for Human Rights, who in 2017 said that the problem of effective investigations and the impunity of security forces in Turkey was very long-standing and entrenched.

Kalin said that his country is "not in the business of fooling anyone."

After the Conflict Zone interview, Kalin faced questions from the audience.

Syrian Kurdish forces and Turkey have accused each other of violating a truce. The Kurdish-led SDF is reportedly pulling away from sections of the border as part of a Turkey-Russia deal. (24.10.2019)