Turkey's Erdogan continues to show footage from the Christchurch mosque shooting to drum up support ahead of local elections. His comments have triggered diplomatic rebukes from New Zealand and Australia. 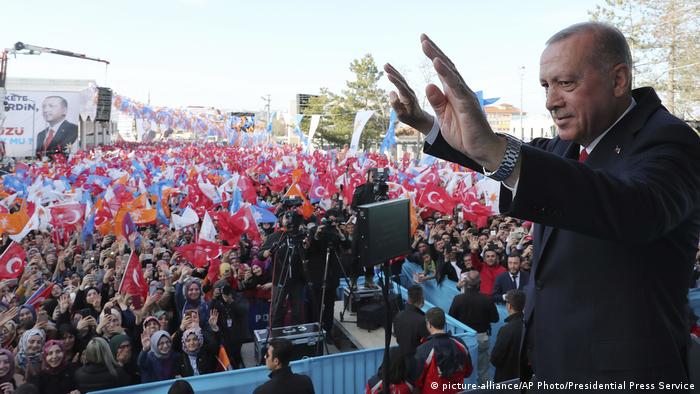 Turkish President Recep Tayyip Erdogan on Thursday again showed a video from the Christchurch mosque massacre at a campaign rally despite sharp criticism from New Zealand.

Speaking to a crowd in Kutahya ahead of the March 31 local election, Erdogan showed footage of the shooting and told his conservative supporters that the killings were part of an attack on Turkey and Islam.

Erdogan used the video to criticize the main opposition party leader Kemal Kilicdaroglu, who has warned against "Islamist terrorism."

Police in New Zealand have charged a 28-year-old Australian citizen with murder for killing at least 50 people at two mosques during Friday prayers. The suspected white supremacist livestreamed the attacks on social media.

The gunman's "manifesto" mentions Turkey and Erdogan as threats.

New Zealand has moved to remove footage of the massacres and publication of the gunman's manifesto from the internet, warning that anyone who shares it may face prosecution.

Erdogan has repeatedly shown a video of the mosque shooting on the campaign trail, drawing diplomatic rebukes from New Zealand and Australia.

In comments earlier this week at a commemoration of the World War I battle at Gallipoli, Erdogan angered Australia and New Zealand by suggesting their soldiers fought against the Ottoman Empire as part of a Christian holy war against Muslims.

The president added that enemies who threatened Turkey would be "sent back in coffins" like those who had fought at Gallipoli.

Erdogan's spokesperson later said the comments were taken out of context.

Australia and New Zealand's top diplomats protested the comments and showing video snippets of the mosque shooting, saying it endangered the lives of their citizens.