Turkey's president has accused Germany of becoming the "backyard" of Gulenists, who are blamed for an failed coup attempt in Turkey. Ankara has requested the extradition of a number of alleged Gulen members from Germany. 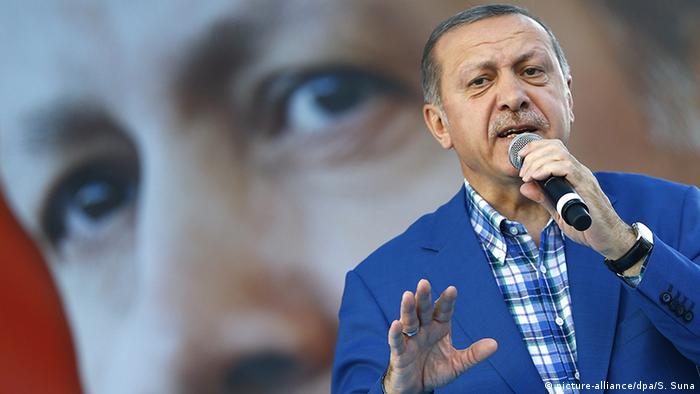 Germany has become one of the most important havens for terror groups, Turkish President Recep Tayyip Erdogan said on Thursday, saying that this "cursed terror will boomerang back and hit you."

Erdogan said Germany had refused to extradite alleged members of FETO, the name the government uses to describe the organization led by US-based Islamic preacher Fethullah Gulen, who Ankara has blamed for the attempted coup in July.

The Turkish president said Germany had for years harbored militants and organizations tied to the Kurdistan Workers' Party (PKK), which has waged a three-decade insurgency for greater autonomy, as well as the far-left DHKP-C. The EU designated both groups terror organizations.

"We are concerned that Germany, which for years took the PKK and DHKP-C under its wings, has become the backyard of FETO," Erdogan said at a ceremony in Ankara. "As I have always said, terror groups are like scorpions, sooner or later they will bite whoever carries them on their back."

The mushrooming of the post-coup purges of more than 100,000 people has drawn criticism in Germany, where there is increasing worry that the conflict between Gulenists and Erdogan backers could spill into the country.  The purges have also raised concerns over the rule of law and Erdogan's attempts to silence all opposition.

When asked about the situation by DW at a press conference, German Foreign Minister Frank-Walter Steinmeier responded by saying that while "Turkey is and will remain an important country in the region in relation to the crises in Syria and Iraq," he "cannot comprehend the comments made by Erdogan about the security situation in Germany."

Steinmeier also expressed his dismay at a German delegation being turned away from the key military base at Incirlik last month, and not for the first time.

"Though we wish to have a close and constructive relationship with Turkey, let us not mince words. From our point of view, there are reasons to be concerned about threats to freedom of the press and freedom of opinion," and Germany will not be silent about it, the Social Democrat added.

Turkish novelist Asli Erdogan, currently in jail for alleged ties to the PKK, appealed to European leaders to support human rights and denounce the crackdown in Turkey.

The Turkish government accused Gulen of infiltrating state institutions, the media and education sectors to create a "parallel state" that allegedly orchestrated the July coup attempt, in which more than 200 people were killed. Gulen has denied any involvement in the coup.

Turkey has long accused Germany of giving the PKK and affiliated organizations room to operate, organize, raise money and spread propaganda. German intelligence estimates there are some 13,000 PKK members in the country, making their presence a perennial sore spot in bilateral relations.

Relations took a further hit earlier this year after Germany passed a resolution classifying the World War I deaths of Armenians in the Ottoman Empire as "genocide."

Turkish EU Minister Omer Celik has called on Berlin to shut down German companies with links to cleric Fethullah Gulen. Turkey's post-coup crackdown has now been widened to include more business leaders. (18.08.2016)

Back in Time - 50 Years of Turkish Guest Workers in Germany