Turkey hits back at Germany over election 'interference' criticism

Turkey's President Recep Tayyip Erdogan has warned Germany's foreign minister to "know your limits" amid a spat over Germany's upcoming election. Erdogan has called on ethnic Turks to vote against the CDU and SPD. 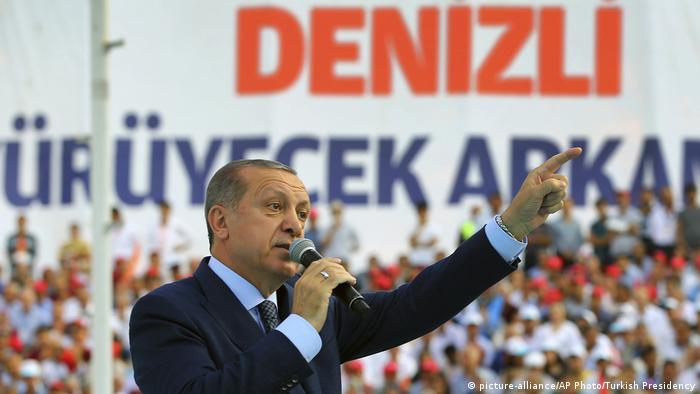 Turkish President Recep Tayyip Erdogan slammed the German government on Saturday for criticizing his appeal to ethnic Turks living in Germany not to vote for the county's two ruling parties in the upcoming September elections.

Addressing a crowd of supporters in the southwestern province of Denizli, Erdogan had particularly harsh words for German Foreign Minister Sigmar Gabriel.

"He knows no limits! Who are you to talk to the president of Turkey? Know your limits. He is trying to teach us a lesson... How long have you been in politics? How old are you?" Erdogan said.

On Friday, Gabriel had condemned Erdogan's comments as an "unprecedented act of interference" in Germany's sovereignty. German Chancellor Angela Merkel also noted that no one would be allowed to "meddle" in Germany's electoral process.

Erdogan on Saturday repeated his call for Turks eligible to vote in the German elections not to cast their ballots for Merkel's Christian Democrats (CDU), their coalition partner and Gabriel's party the Social Democrats (SPD) or the Green party.

"Teach them a lesson in the German elections," he said. "They are waging a campaign against Turkey. Vote for those who don't have enmity towards Turkey."

No freedom for jailed Germans

The Turkish leader also said on Saturday that Germans who are currently jailed in Turkey will not be released.

"I gave the file of 4,500 terrorists to the lady in charge of Germany, and unfortunately the files of these terrorists were not accepted," Erdogan said referring to a request sent to Merkel that asked for the extradition of suspects wanted on terror charges.

"However, she asked me to return one person, two people, three people," Erdogan said. "Forgive me but you have your legal system and so do we."

There are three Germans citizens currently imprisoned in Turkey, including Deniz Yucel, a journalist from Berlin-based Die Welt newspaper. He has been jailed in Turkey since February on alleged terror charges.

In another bone of contention, a German writer of Turkish origin, Dogan Akhanli, was arrested in Spain on Saturday at Ankara's request. The exact charges remain unclear.

Relations between Ankara and Berlin has become increasingly strained since last year's failed coup in Turkey, which prompted Turkish authorities to fire or suspend some 150,000 people and detain over 50,000.