The diplomatic spat between Germany and Turkey is showing no signs of letting up. Turkey's foreign minister fired off a long series of tweets slamming his German counterpart. 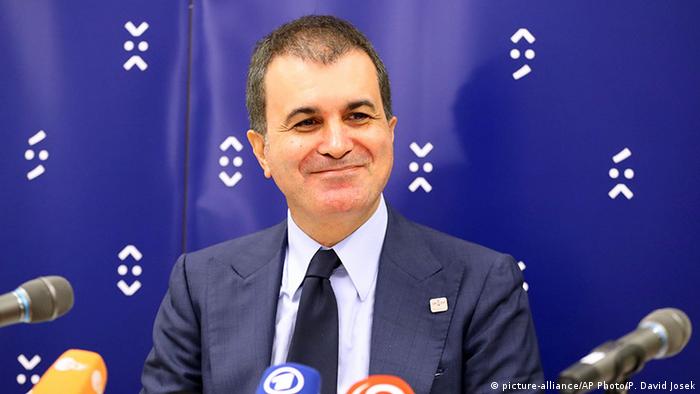 Turkey's minister for European Union affairs, Omer Celik, in a Twitter tirade on Wednesday accused the German foreign minister, Sigmar Gabriel, of emulating the "far right and racists" when discussing the diplomatic crisis with Turkey.

"Gabriel is not making original statements. He speaks by 'copying' from the far right and racists," Celik wrote.

Celik then accused Gabriel of trying to "sabotage" Turkey-EU relations after German Chancellor Angela Merkel recently opposed the expansion of the EU customs union with Turkey.  Celik said Germany was "giving racists a message of 'You're right.'"

The attacks on Turkish President Recep Tayyip Erdogan and his country by "racists, fascists and enemies of Islam" meant "nothing" to Ankara, he said.

The German Foreign Office rejected Celik's statements about Gabriel as "hurtful and unacceptable."

"This should not be repeated," Minister of State Michael Roth told national daily Die Welt. "Our dealings should be marked by respect for the respective counterparts."

On Sunday, Kurz condemned "the constant interference by Erdogan in the internal affairs of other states" and suggested Germany was not the only country where Turkey interfered.

On Tuesday, Gabriel claimed that Erdogan's strident style "had apparently led some to feel motivated to try to threaten and harass my wife."

Last week Erdogan urged ethnic Turks in Germany to vote against Merkel's conservatives and two other "enemies of Turkey" in the September elections.

Gabriel said such messages showed that Erdogan wanted to incite people in Germany against each other in "an unprecedented act of interference in the sovereignty of our country."

Germany recently tightened its travel advisories for Turkey and warned German companies against investing in Turkey.

Further inflaming tensions between the two countries, the co-head of the Greens party in Germany Cem Özdemir said he did not want Turkish teachers working in Germany.

In an interview with Die Zeit, he said "the authoritarian vision and the nationalist understanding of history" by Erdogan "are spread in German classrooms."

As a child, he said his Turkish teachers taught him not to question the state or religion.

"Children should ask as many questions as they want," he told the weekly newspaper.